First facility opened in Cork and employed 60 people, marking expansion outside US 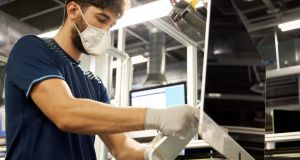 The Cork manufacturing operation opened in 1980, employing 60 people. That has grown to more than 6,000.

Apple is celebrating 40 years in Ireland, marking the opening of its first manufacturing facility and the expansion of the company outside the US.

The Cork manufacturing operation opened in 1980, employing 60 people. That has grown to more than 6,000 at a large campus in Cork that now serves as Apple’s European headquarters and includes AppleCare, operations, logistics and other teams.

Apple is now a mutibillion-dollar company with an array of products and services.

The Irish operation has also seen some controversy, most notably the ongoing tax case which saw the European Commission order Apple in 2016 to pay €13 billion plus interest in back taxes to the Irish exchequer, claiming the company had received “illegal” tax benefits over the course of two decades that constituted a breach of State-aid rules. Appeals are ongoing, with the Government and Apple successfully appealed the commission’s original finding earlier this year, and the case now moving to the Court of Justice of the European Union, the EU’s highest court.

Apple also abandoned plans for an €850 million data centre in Athenry, Co Galway after the project became delayed by objections.

The Cork campus has also evolved, with new buildings that have been designed with environmental responsibility in mind. The campus runs on 100 per cent renewable energy, with more than 200 solar thermal panels, and it harvests rainwater to supply toilet facilities. The manufacturing facility has also achieved zero waste to landfill.

Staff, meanwhile, have become involved in the local community through Apple’s Giving programme, which matches employees’ time spent volunteering with organisations with monetary donations. Since 2015, the programme in Cork has supported more than 400 registered charities in Ireland, including Age Action, which provides free technology classes for senior citizens.

“This is a charity that is very close to my heart,” said Apple employee Alvaro Porcel. “It’s not just about learning how to use your device. There’s a huge social aspect as well. Most of these elderly people are very isolated. Before Covid-19, there were weekly face-to-face events, but now we have phone calls instead and when they tell you, ‘this is the only phone call I’m going to get today’, you can feel how much it means to them.”

Vice-president of European operations is Cathy Kearney, who has been with the Cork operation for more than 30 years.

“The Cork campus is more than a place, we’re a family,” said Ms Kearney.