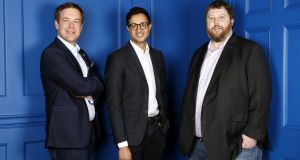 The VC, which is one of the lead backers of Mr Collin’s “kidtech’ company SuperAwesome, is well known for taking a punt on companies that have gone on to become tech unicorns. Among the start-ups it has backed at seed level are digital health provider Babylon Health, cybersecurity specialist Darktrace and food delivery giant Deliveroo.

A tech unicorn is a privately-held company that is valued at more than $1 billion.

“Ireland is very much on our radar. That’s where both Dylan and the Collison brothers came from,” he said.

The VC knows the Irish start-up scene relatively well having previously carried out an assessment on behalf of Enterprise Ireland.

“Our challenge is finding the companies that can scale up to the SuperAwesome and Stripe levels, so our geographic distribution is a bit stochastic based on where things come from,” Mr Kanji added.

Hoxton is regarded as one of Europe’s top performing early-stage venture capital firms, with its first fund having the highest ratio of unicorns to investments, according to Dealroom. Portfolio companies have grown to an aggregate value of more than $7 billion.

Hoxton typically invests between $500,000 and $5 million into pre-seed, seed and Series A stage companies, and generally follows its capital through the life of the investee.

“We set up Hoxton to address a market gap at a time when few venture firms wanted to invest at the early stage in Europe,” added Mr Kanji. “Success stories like Darktrace and Deliveroo show that our region can produce large, global tech winners.”

SuperAwesome, which Mr Collins founded in 2012, recently agreed a new partnership with the world’s biggest advertising company, WPP, to better protect children online in what it said was a huge milestone in ensuring digital privacy for young people.

The company, whose backers include Microsoft, has developed a kid-safe marketing platform that operates as a bridge for brands to reach those aged between six and 16. It has raised about $60 million to date and is now valued at over $100 million.