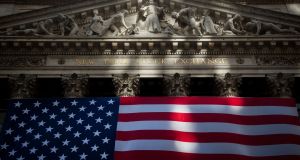 The US issues 65,000 H-1B visas a year to US employers recruiting in speciality occupations. Between 2010 and 2015, more than 3,200 such visas were issued to Irish citizens. Photograph: Michael Nagle/Bloomberg

Plans by US president Donald Trump to overhaul a work-visa programme that technology firms regularly use to hire tens of thousands of employees each year could have “devastating consequences” for Irish startups and workers stateside.

According to a draft of an executive order from the president seen by Bloomberg News, the revised plan would reportedly force tech firms, including Microsoft, Google, Apple and Facebook, to try to hire Americans before casting the net wider for foreign workers. It also says that if firms recruit foreigners, priority is given to the most highly paid.

The proposal comes just days after the new president banned refugees and travellers from seven predominantly Muslim countries, in a move that has caused widespread upset.

The US government currently issues 65,000 H-1B visas a year to US employers recruiting and employing professionals in speciality occupations, including IT.

It is worrying. Employment visa options in the US are quite restrictive

Between 2010 and 2015, more than 3,200 such visas were issued to Irish citizens, with an average of 640 provided each year to IT professionals moving to the US. The visa entitles citizens to stay for a maximum of six years.

While the top recipients of the H-1B visas are outsourcers and come primarily from India, there is concern that any changes to the visa programme could be detrimental for Irish tech firms, many of whom avail of it when setting up operations in the US.

“It is worrying. Employment visa options in the US are quite restrictive and the H-1B is often the only route for a lot of people trying to get in,” said Louise Corrigan, principal of Dublin law firm Louise M Corrigan and Associates, which specialises in US and Irish visa and immigration law.

“It is a guessing game as to what might end up in a final order but even if it is just minor changes to recruitment requirements it could be cost-prohibitive, particularly for smaller employers who already find it an expensive process.”

Irish tech entrepreneurs living in the US such as Intercom’s Eoghan McCabe and Patrick and John Collison, the Limerick-born brothers behind online payments firm Stripe, have been among the most vocal critics of Mr Trump’s moves against immigrants.

In a blog post published on Tuesday, Mr McCabe reached out to Muslim tech workers impacted by Mr Trump’s travel ban. He said the company would connect IT professionals with tech companies in Dublin, and would retain their immigration lawyers to work on their behalf and pay their legal bills up to €5,000, for those who decided to move to Ireland.

Speaking to The Irish Times, Mr McCabe expressed concerns not just for Irish tech firms but for Silicon Valley as a whole.

“Demand for technology, and tech companies’ desire to build it, both outpace the supply of talent in the world to do so,” he said. “There are no tech companies who say they have enough engineers. None. In the Valley this imbalance is more extreme than anywhere else. There are thousands of tech companies here.

“So we will take talent from wherever we can get it, and extremely often that talent will come from outside the US. Visas like H-1B are crucial to the tech industry. These types of visa are already incredibly restrictive and difficult to obtain. Last year we’ve had to pass on at least a dozen excellent, eager candidates who we were unable to hire due to these immigration restrictions. Making the visas even harder to obtain would only slow the Valley down further,” he said.

“Additionally, the Valley is the Valley because it is the one place everyone in tech moves to, so they can work together. An incredibly large portion of the tech industry here are immigrants like me. Shutting down visas further and making it hard for these people to come here and create what the Valley is will actually kill the Valley,” Mr McCabe added.

There are alternatives to the H-1B for Irish technology firms, including E-class visas, which are not capped and can be renewed indefinitely, although these can be harder to obtain.

“The specific concerns that have been voiced around the H-1B programme, which are awarded by lottery, are largely around the use of these visas to bring technology workers in from lower cost jurisdictions to work at a lower salary than the prevalent US market rate. Therefore from the perspective of Irish companies, the issue seems avoidable by ensuring candidates are suitably qualified and recompensed at US market rates,” he said.

Separately, Paul Sweetman, director of the Ibec-affiliated group Technology Ireland, said there was an urgent need for clarity.

“Many companies based in the US have benefited from visa programmes such as the H-1B programme. Advanced notice and strong consultation should be core to any changes that may be proposed,” he said.