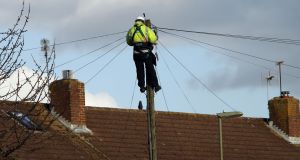 ComReg has given Eir and its rivals a three-month window to negotiate the level of service credit owed if Eir breaks the new two-day rule. Photograph: Steve Parsons/PA

Under the ruling, the State’s largest telco, Eir, will be obliged to fix line faults within two days or pay a service credit to rivals that use its network.

Eir’s main rivals – Sky, BT, Vodafone and Magnet – had complained to ComReg about the former semi-State’s repair times, claiming they were below European industry norms.

Under its previous service level agreements with companies using its network, Eir had been obliged to fix 77 per cent of faults on customers’ lines within two days and 92 per cent within five days.

However, in a ruling published on Tuesday, ComReg has imposed a tougher 48-hour threshold on faults related to certain products.

The regulator has given Eir and its rivals a three-month window to negotiate the level of service credit owed if Eir breaks the new two-day rule.

Alto, the umbrella group for non-Eir firms, welcomed the ruling, describing it as positive for firms and consumers in terms of fault repair and service availability.

Eir declined to comment other than to say it was examining ComReg’s ruling.

Separately, consultancy firms Cartesian and KMPG are in phase two of a review of Eir’s regulatory governance model. The review was prompted by complaints that Eir was abusing its dominant position in the market. At issue is whether the company’s wholesale arm should be further separated from its retail business. ComReg last year outsourced the review on the grounds that it did not have enough resources to conduct its own investigation.

Access to Eir’s broadband and fixed-line network remains a contentious issue amid allegations Eir favours its own retail arm over rival telcos.