Cold-calls given the heave-ho with big data technology 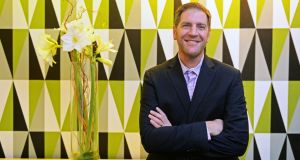 Dave Elkington: “My goal is to build a great business and create huge value for our customers. At the end of the day an IPO is just a funding event.” Photograph: Eric Luke

The cold-call is dead and few will mourn its passing. With the rise in sophisticated customer relationship management (CRM) technology, it is now almost impossible for a salesperson not to know a little something about the prospect they are chasing. And they have numerous ways in which to connect with these potential leads.

One company that has helped bury the cold-call is InsideSales.com. The Utah-headquartered predictive analytics company has recently announced plans to create 120 high-tech jobs in Ireland by setting up a “centre of excellence” for artificial intelligence (AI) and machine learning.

InsideSales.com is behind a data-fuelled sales acceleration platform built on Neuralytics, a predictive and prescriptive self-learning engine. It allows sales staff using customer relationship management (CRM) platforms such as Salesforce to know potential customers inside and out.

While it does have rivals, most notably Volocify, what sets InsidesSales.com apart is the sheer volume of data it makes available to salespeople to help them win deals. The company claims to have the largest enterprise database in the world, with statistics covering at least 80 per cent of buyers in the US.

“In its simplest form, Neuralytics is a big correlation engine,” says the company’s founder and chief executive Dave Elkington, talking to The Irish Times on a visit to Dublin this week.

“We then look at the context around those interactions. We know, for example,that if it is sunny in Dublin but raining in London, you should be selling into the latter because contact rates are higher when there is bad weather. That is unless there is a high-profile rugby match on in Ireland in the coming days as that will bring about a euphoric effect for about 72 hours.

“Of course, that could be offset if there’s very bad traffic in the city as that leaves people annoyed and less willing to engage,” said Elkington.

This may all sound a little scary, but being able to go into such granular detail to gain additional insights that can help swing sales has proven to be extremely lucrative for InsideSales.com, whose backers include Microsoft, Salesforce and, as of this month, the Irish State.

While the company does not disclose revenues, Elkington said he expects annual turnover to surpass €1billion within five years.

“We’ve been a very high-growth company. Our value proposition is ultimately revenue uplift. It is not untypical for clients using our technology to see a 50 per cent rise in productivity and a 100 per cent jump in turnover.”

Founded in 2004 in Provo, InsideSales.com, which employs 500 people, has raised $250 million (€234m) to date. Famously, Elkington refused to take on any outside investment during its first six years in business outside of a small loan from his mother-in-law. Instead, he and his wife bootstrapped the company, even taking on graveyard shifts cleaning a doctor’s surgery at one point to make ends meet.

The entrepreneur has had a varied career, with time spent working in banking and venture capital, as well as a couple of years spent on a Mormon mission in Japan and 12 months studying at the Hebrew University in Jerusalem.

He was adamant he would only raise money when the moment was right. “Because I worked in venture capital previously, I knew about the advantages and disadvantages of it, and it’s not always the right thing to do. Rather than raising money straight out of the gate, I decided to bootstrap it so we started out as a services company while we built out our software and expanded from there.

“Increasingly there’s a rush by companies to bring in cash hand over fist but that’s not our strategy. In fact, we actually deliberately raised less in our latest round than previously.”

It has also signed a strategic agreement with the Insight Centre for Data Analytics, a joint initiative between UCD, NUI Galway, UCC, and Dublin City University.

Insight, which was established by Science Foundation Ireland in December 2013, is now one of the biggest analytics centres in Europe, with some 350 researchers tasked with looking at how to derive value from big data.

Eugene O’Callaghan, director of the ISIF, told The Irish Times its backing of InsideSales fits the fund’s criteria for a commercial return and its requirement to generate economic impact and employment in Ireland.

“This investment paves the way for significant job-creation in Ireland. It will enhance Ireland’s reputation as a major hub for advanced technology ventures and the planned collaboration between InsideSales and the Insight Centre should foster further growth in this specialist sector,” he said.

Elkington in return is full of praise for Ireland, speaking positively about his interactions with IDA Ireland and about the quality of the graduates coming through the State’s universities.

“Ireland is in the top quartile for sure in terms of data analytics. Previously, I would have seen Ireland predominantly as a centre for sales or call centres, but having met people here and seen the sophistication of the research being generated here and the number of PhD students, I knew it would be a good cultural fit for us.”

While Elkington might have made a lot of money from the company he established 13 years ago, he is adamant that is not what motivates him. A practising Mormon who was born and raised in Provo, the third largest city in the religious group’s heartland of Utah, he originally studied philosophy, and said it is something that still has a big influence on him.

“InsideSales originally came about through my interest in philosophy. I wrote a senior thesis around the premise of using set theory and epistemology in the ways humans categorise data and whether this was a systematic or organic thing. After I spent some time working in banking and venture capital, I went back to do a masters in computer science basically so that I could algorithmically represent my philosophical hypothesis. The company is ultimately the execution of that thesis.”

“There have been a few times when I’ve gone a little bit over my skis,” he said. “One time in particular we nearly went bankrupt when the credit crunch hit. We had a $100,000 line of revolving credit which came up for renewal in October 2008, the worst possible time. While we had never missed a payment, it got pulled and we came close to going out of business then.

“Leadership went without comfort for three or four months, but funnily enough it ended up being a good time for us because growth really accelerated around that time as companies were set on looking for waste optimiser sales products.”

Perhaps unsurprisingly, Elkington’s heroes include philosophers Aristotle and Kierkegaard, and philanthropists such as Bill Gates and Andrew Carnegie, as well as scientists like Nikola Tesla.

Following in the footsteps of his philanthropic heroes, Elkington established the Do Good Foundation early on at InsideSales. It uses a 1-1-1 model, donating 1 per cent of revenue, 1 per cent of product and 1 per cent of employee time to worthy causes.

While the company initially targeted tech firms with its platform, Elkington says it is growing fast in a number of sectors, including financial services and healthcare.

“My goal is to build a great business and create huge value for our customers. At the end of the day an IPO is just a funding event. All it is is access to capital to help the company grow. At some point I want to create liquidity for investors and employees so it is a potential for the future but it’s something that is more of a milestone than an end goal.

“Within five years we should be a very large organisation globally and I’d assume we’d be coming up with around $1 billion in revenue and that our predictive cloud will be one of the biggest platforms in the market. The world is ours.”

Something you might expect: He never really stops working. “As an entrepreneur, I’m always on. If I’m out for a run and I get a call, I’ll stop and take that call. Likewise, if I’m on vacation and someone rings, I’ll pick up”

Something you might not expect: He speaks fluent Japanese, is a big reader and exercises every day without fail

1 ‘No demand... because there are no people’ at well-known Dublin pub
2 Nearly 30,000 could lose pandemic payment if they do not confirm eligibility
3 HSE says fix for Covid Tracker app rolled out to all Android users
4 Bank of Ireland does U-turn after refusal to reimburse ‘smishing’ victims
5 UK criticised for ‘unforced errors’ on post-Brexit trade deals
Real news has value SUBSCRIBE