Lofree: Revert to type with this old-school keyboard 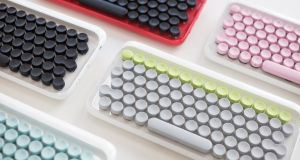 Long for the days when keyboards were mechanical instead of touch-sensitive? Yet you aren’t willing to give up all the extras that modern technology has brought? Then take a look at the Lofree. It looks a bit like an old typewriter, with round keys, and it’s mechanical rather than touch-sensitive, but it comes in both wireless and wired modes. It can also pair with up to three devices at the same time – your computer, your phone and your tablet – and it has three backlight settings on it.