Tech Tools: If you’re serious about your photography, maybe you would 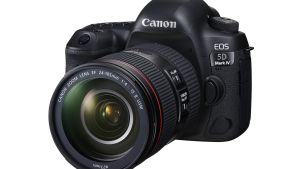 Let’s get one thing out of the way first. For the average person on the street, the thought of spending almost €5,000 on a camera – and a bulky one at that – is ludicrous. Not when they can whip out a smartphone and take a perfectly decent photograph on a 12-megapixel camera before sharing it with friends and family in a matter of seconds.

The Canon Eos 5D Mark IV is not for you. It’s for those photographers who straddle the hobbyist/professional sphere, but aren’t quite sure the Eos 1D is in their budget.

If you would rather carry around a smartphone and trust it with capturing all your memories, then don’t even glance at the 5D. And it’s not as if there is anything wrong with that – most smartphone cameras are more than capable of shooting amazing photographs that would stand up to scrutiny. That’s what Apple’s entire “shot on iPhone” campaign is supposed to prove.

The Canon 5D Mark IV, however, stands apart. It’s a digital SLR, with swappable lenses (prepare to empty your wallet into Canon’s coffers right now), 4K video capture and wifi that will transfer your photographs to your online storage, email or even smartphone, through Canon’s app that connects to your device.

The sensor has been bumped up to 30.4 megapixels, which throws a bit of shade on your smartphone camera. And with a decent set of lenses, you can turn your 5D into an all purpose snapper that can handle anything from outdoor sports to low light. The only thing that limits you is your own photography skills.

It’s a full-frame sensor, so no annoying magnification on your lenses, and will shoot at a rate of seven frames per second to make sure you don’t miss a split second of the action. There’s a 61-point autofocus too, with 41 cross points. Basically, you have zero excuses for turning in bad shots with this camera. I tried.

You can also shoot decent video on the 5D, a feature Canon has been offering on its DSLRs for some time. The 5D not only offers full HD video, but also 4K, and you can capture high quality stills from that footage too. For some fast moving footage, I resorted to capturing in 4K and extracting some stills afterwards, and the quality was more than decent. For the amount of money you are investing in the 5D, you would expect extra features such as 4K, and you would expect the resulting footage to be great, even if your own skills are a little lacking. You have the option of fully manual controls and shooting in RAW, or letting the camera pick up some of the slack and switching to more automatic modes.

It always comes back to price though. That €4,299 price tag is for the body only, so you’ll have to shell out a little more to start stocking up on your lenses. It’s a slippery slope though. First you get the all-rounder lens. Then you decide you need something a bit faster for shooting action scenes. Or maybe it’s a portrait lens you’ve been eyeing for a while. Either way, before you know it you have spent almost the same price as the camera body on an array of lenses for your camera.

The bumped-up resolution and the expanded autofocus points are a good addition to the 5D. Canon is also covering itself on the video side of things, with 4K video making an appearance.

Transferring images off the camera is relatively easy through the app, meaning you can edit the footage on a more powerful photo editor - say on a tablet - and send your finished images without ever having to touch a PC.

It’s a little on the pricey side but that has to be weighed up against the camera’s features. If you aren’t that bothered about your photography, this camera will be a little too rich for your tastes. But even at the €4,000-plus price tag, the 5D is far less pricey than its 1D sibling, which clocks in at almost €2,000 more, and while it may fall a little short on spec compared to its pricier sibling, the 5D is certainly a good investment.

Wifi and NFC are fairly standard on cameras now, and Canon doesn’t disappoint here. Built in GPS will also geo-tag your photos, if you want to keep track of your shoot locations.

For keen hobbyists, semi-pro photographers, or even professionals looking for a backup, the 5D is a winner.