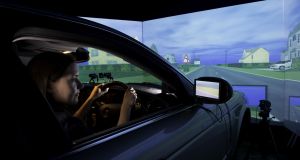 Driverless test: drivers took between 1.9 and 25.7 seconds to switch cars from automation to manual control

A crucial factor in the design of driverless cars is “takeover time”, or the time it takes to switch from automated to human control, say research engineers from the University of Southampton in the UK.

Prof Neville Stanton and Alexander Eriksson ran tests on how long it took individuals to switch over from automation to manual control, and found there was a notably large difference, ranging from 1.9 to 25.7 seconds.

The experiment consisted of a simulated driving task, in which one group was allowed to drive undistracted while another was given a potentially distracting secondary task to carry out (because drivers inevitably listen to the radio, rummage about for chewing gum, glance at their smartphone screens or even take calls). It was found that those engaged in a secondary task took much longer to switch to manual control, posing a potential safety hazard.

“We hope our findings can guide policymakers in setting guidelines for how much lead time a driver will need when changing in and out of automation,” said Stanton.