Partnership would be a serious threat to Eir, which dominates regional markets 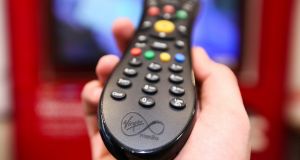 The move would extend Virgin’s reach by a third overnight. Photograph: Chris Ratcliffe/Bloomberg

Virgin Media is understood to be considering a strategic alliance with broadband provider Siro that would see it sell TV and broadband bundles to customers in regional towns.

The move would represent a serious threat to market incumbent Eir, which dominates the regional and rural market here.

It would also mark a major departure for Virgin, which until now has operated exclusively off its own cable network and primarily in cities and larger towns.

According to sources, Virgin and Siro officials have held a series of meetings in recent weeks to discuss a possible tie-up.

The move would extend Virgin’s reach by a third overnight. Its network currently passes around 900,000 of the State’s two million premises while Siro’s passes around 275,000, and there is not thought to be much overlap between the two.

Virgin may opt to join the Siro network in a traditional operator-retailer arrangement, paying Siro a wholesale fee for each customer it signs up.

It could alternatively opt for a closer business relationship, potentially taking an equity stake in Siro, which was set up in 2015 as a joint venture by ESB and Vodafone.

Both companies are also involved in a joint venture in the Netherlands.

Virgin Media Ireland declined to comment directly on the report. A spokeswoman said: “We talk to industry partners/stakeholders all the time and have nothing at all to comment upon or announce.”

Siro recently secured an additional €200 million in funding to finance the next phase of its roll-out, one that will deepen its operations in Cork and Galway while extending its reach into areas such as Howth, Malahide, Sutton and Ballyogan in Dublin, and to regional towns such as Nenagh, Enniscorthy and Donegal.

Eir also recently announced a €500 million overhaul of its fixed broadband platform and a renewed focus on city markets, where take-up and revenue are easier to predict, and where it has lost ground to rivals.

1 Fiona Reddan: Who’s afraid of Revolut? Not AIB and BOI it seems
2 Lahinch Golf Club runs out of its own cash after €3m Covid-19 hit
3 Son putting elderly dad under pressure to sign over land
4 France demands digital tax payments from US tech groups
5 BOI customers to be charged twice with bank fees on New Year’s Eve
Real news has value SUBSCRIBE