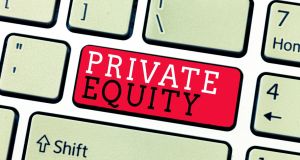 Private-equity buyouts have accounted for 19.8 per cent of all M&A deals in Ireland so far this year, the highest percentage recorded since the financial crisis.

Irish private-equity buyouts are on track to reach one of the highest annual figures on record, while tech deals continue to account for the lion’s share of mergers and acquisitions (M&A) deals locally, according to new data compiled by Mergermarket.

The figures, which have been published ahead of an event to be held by the research company in Dublin on Thursday, shows the volume of such buyouts is at its second highest to date, with 21 deals worth €1.9 billion.

In addition, private-equity buyouts have accounted for 19.8 per cent of all M&A deals so far this year, the highest percentage recorded since the financial crisis.

Technology continues to be the most active M&A sector with 21 deals so far in 2019, just one short of last year’s total count.

The largest tech deal of the year so far is the €447 million investment by Insight Venture Partners and TPG Capital into Dublin-headquartered management software company Kaseya in May.

M&A activity in the financial services sector has also been strong with 17 deals to date, one more than for the whole of 2018.

The biggest deal in the sector so far this year has been the €250 million investment in Castlehaven Finance by Avenue Capital Group.

Ion Investment Group, a Dublin-based company, took a majority stake in Mergermarket’s parent Acuris earlier this year in a deal valued at more than £1 billion.