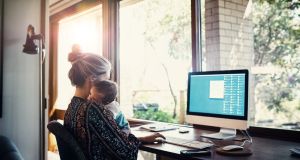 ‘Instead of getting excited on Fridays about how I was going to spend the weekend, I started to dread it.’ Photograph: Getty Images

When Zoe Desmond dreamed up Frolo, her relationship with her son’s father had just broken down. She was based in London and found the aftermath of the break up a lonely experience.

“When a relationship breaks up it’s never really pleasant but I found it was particularly hard dealing with the loneliness and isolation I felt as a single parent,” she says. “The weekends I found a struggle in particular and instead of getting excited on Fridays about how I was going to spend the weekend, I started to dread it.

“I kind of kept to myself, but what I really craved was knowing other people in the same situation who could relate to aspects of what I was going through, and who were also available at the weekend to have playdates and lunches. Ultimately I dreamed about maybe even becoming friendly enough with other people in my situation that we could go on holiday together, little trips away together, to have my own little kind of community, to empower myself in the situation, instead of looking at a long lonely road.”

Desmond took to the internet to find out if such a place existed, but drew a blank. “I really wanted to find people near me who had the same interests, and kids the same age, but I couldn’t find what I wanted,” she said, describing some of the groups on Facebook as “quite grim and quite negative”.

With this in mind she developed Frolo, a community specifically aimed at bringing together single parents.

The name Frolo comes from a mash-up of “friends” and “solo”. It’s strictly for single parents but is open to both mothers and fathers regardless of how they came to be parenting solo. The emphasis is not on dating but on finding human connections; the platform is designed to connect like-minded single parents near each other.

Back in the early days of Frolo, it was just an idea, but Desmond knew what way she wanted the app to look. Her ideal solution was an app that connected you to like-minded single parents, by location proximity, by shared interest and by children’s age. It needed to give you a way to privately message potentially suitable people and find meet-ups or organise events, such as picnics in the park.

“The last bit of functionality I saw in my head was a community news feed, where you can put out any sort of question or [seek out any] piece of advice or guidance you’re looking for,” Desmond says.

It was a chance meeting with a woman who lived close to Desmond that finally pushed her into action. They had stopped to chat a few times, but neither knew the other’s personal circumstances.

“This whole time that I’d known her, that we had stopped to chat with our sons pulling out of our legs, we didn’t know that each other was a single parent,” she says. “On one had I felt frustrated that she was just around the corner from me, and all those times we could have been hanging out together, and keeping each other company and giving each other support. On the other hand I felt elated that I had tapped into somebody; it felt like such a relief to chat to somebody in a similar situation. That was the light bulb moment.”

Frolo started on Instagram, gathering a band of like-minded followers. There have been several Frolo events, including an area for Frolo users set up by Camp Bestival earlier this year, and more informal arrangements, such as dinners.

Desmond has now built a dedicated app for Frolo, and will start to build the community further, including in Ireland. More than 1,500 people have signed up through word of mouth, with 4,000 in the Instagram community.

The app, which is about to go live, will have a subscription fee of £5 per month or euro equivalent, something that could deter those who are being less upfront for their reasons for joining the site. Another security feature will be verifying identity through a live photo taken through the app.

Desmond has bootstrapped the app from her own funds up until now, but will be looking for investment in the near future. She intends to add more services over time, with plans for a premium membership to give subscribers access to dating, holidays, legal advice and so on.

“It really does change the single-parent experience,” says Desmond. “It’s doing exactly what I’d hope to do, which is making me feel much more happy and empowered, and it helps me to be the best mother I can be as well. I’m giving my son really lovely and rich experiences. He’s being around other families who also don’t have two parents living under the same roof, and he gets to see actually this is also normal, that there lots of different shapes and sizes, that families come in different set-ups. It’s lovely for me, for him to be around that so that he doesn’t feel different, or like there’s something wrong with him.”

GET TOGETHER: OTHER ONLINE COMMUNITIES

Parenting is a lot of things: funny, rewarding, fulfilling, challenging, tiring and tough. Very, very tough. You learn a lot about yourself as they are learning about the world, but sometimes it can all get a bit much.

It helps if you have an outlet, somewhere non-judgmental where you can get advice and sometimes shout into the void a little. The support is not always there when you need it, so it’s not surprising that there are several thriving online communities aimed at throwing parents a lifeline when they need it most. Here’s a selection of some of those available at present.

Rollercoaster
Rollercaster has been around for a while. The site bills itself as Ireland’s most popular website for pregnancy and parenting. I deals with everything from fertility and conception right through to how to keep your family life running smoothly (or as smoothly as possible).

It also has a forum, where registered users can discuss all aspects of parenting and general day-to-day life events, or seek out recommendations.

If you are a parent-to-be, there are groups you can join according to the month your baby is due. It’s not just for the nine months or so of pregnancy; many people stick around afterwards in the groups to share the ongoing trials and tribulations of trying to keep tiny humans alive. It seems like a small thing, but when you are in the grips of a parenting panic it’s nice to know you aren’t alone.

Familyfriendlyhq.ie
This website takes an all-inclusive approach, catering to mothers, fathers and families of all shapes and sizes. It offers news, advice and information on everything from food and wellness to tips for all life stages, from fertility and pregnancy through to raising primary and secondary school children. There is plenty to wade through here, with suggestions for family activities and travel destinations.

There’s also a roster of experts and authors that will cover everything from psychology and career advice to nutrition and step-parenting.

Herfamily.ie
This is one of the Maximum Media stable of sites – also including joe.ie, her.ie and sportsjoe.ie – and promises a judgment-free platform to deliver advice, news, tips and tricks for parents, covering topics such as sleep and fertility, beauty, style and nutrition. As the name implies, it’s aimed at women, but that doesn’t mean that dads can’t dip in and out of it too.

DaddyPoppins
A parenting blog written from a dad’s point of view – as if the name didn’t give it away – and dealing with topics such as “How to say no to socks” and ear piercing. It is written by Benny Finlay and is one of the only websites that takes the point of view of the stay-at-home dad. Or even just the hands-on, fully involved dad. There is a very definitely “mum slant” to the main parenting websites, although none of them explicitly say they’re not for dads. Plus it’s the only one with a dedicated “Dad jokes” section.

Mams.ie
Formerly Mumstown, Mams.ie covers everything from pregnancy to babies, teens and beyond. The website was set up by Siobhán O’Neill-White in 2007. It initially focused on Drogheda but has since grown to include everything from parenting advice to product and activity reviews. The forums have an “Ask the expert” section where you can pitch your questions on everything from travel and beauty to finance.

It has a forum for dads, too, although it’s nowhere near as active as some of the other boards it offers.

GirlCrew
Not strictly for parenting: Girlcrew is a friendship app, designed to bring together women who want to widen their social circle. It started as a Tinder experiment and moved on to Facebook, with a network of groups set up for different locations and interests. Among the various subgroups are groups aimed at mothers in Dublin, which can be a good place to go for advice on various parenting issues or even just to link up with mothers with similar-aged children.