US tech firm hiring in Dublin says: 'This is a special company' 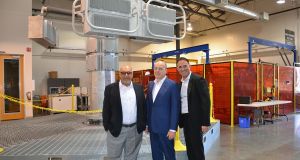 Smart Wires, a US technology company that recently raised almost $55 million, is to create 40 jobs over the next three years with the opening of a new European headquarters in Dublin.

The company works with utilities to enable them to better route power around existing grids, was founded in 2010 in Union City, California. It currently employs 200 people globally.

Smart Wires said it hopes to fill ten of the new roles in Dublin, which are in engineering and business development, as early as possible.

The company said the new European team will be primarily working on projects in the UK, Germany, France and Greece with further expansion likely.

“This is a special company with technology that will change how utilities everywhere think of power grids,” said Michael Walsh, managing director for Smart Wires in Europe.

“We can now solve problems in weeks that traditionally took years. Our flexibility means we can respond to changing demands as they happen - saving customers money and reducing our impact on the environment and communities”.

Smart Wires earlier this year raised $54.6 million as part of an $88.1 million total offering, according to a US Securities and Exchange Commission filing.

The company, formerly known as Smart Wire Grid, was recently named one fo the 50 fastest growing companies by the Silicon Review.