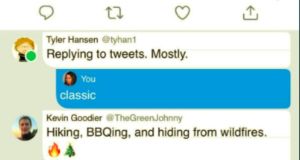 The presence feature would fundamentally change Twitter functionality from its original purpose of microblogging to a messaging-style platform.

Twitter is testing out two new features, according to co-founder and chief executive Jack Dorsey, who tweeted late last week that the platform was “playing with [. . .] presence (who else is on Twitter right now?) and threading (easier to read convos)”.

The idea, says Twitter product developer Sara Haider, is to make Twitter feel more chatty; not only will it be easier to follow a conversation by creating more visible reply threads but the presence feature will fundamentally change Twitter functionality from its original purpose of microblogging to a messaging-style platform where users can see who else is live right now, much like Facebook Messenger.

These new features are in test mode and may not be incorporated into a future iteration of Twitter: “still early and iterating on these ideas. Thoughts?,” tweeted Haider.

“The online-indicator would be a nightmare for targets of harassment, even if it was opt-out, please don’t do it,” said one user, Avery Edison.

1 Wet pub openings fuelled rise in Irish Covid infection rates – report
2 Ten of the most mysterious aircraft disappearances
3 Basic income for all: Has the Covid crisis given us a new economic model?
4 Only way is up for Stripe as valuation skyrockets
5 Unilever’s Dutch and British arms merge after 90 years ahead of Brexit
Real news has value SUBSCRIBE