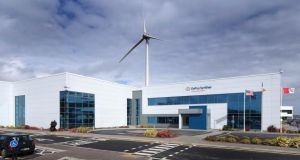 The Depuy Synthes facility in Ringaskiddy, Co Cork, is one of nine named as the leading factories globally for embedding new technologies such as internet of things into modern production.

An Irish medical device manufacturing facility has been named as one of the top nine most advanced factories in the world due to its use of internet of things (IoT) technology.

The Depuy Synthes facility in Ringaskiddy, Co Cork, which produces replacement hip and knee joints, achieved the ranking for using the technology to make old machines talk to one another. The result has been a 10 per cent reduction in operating costs, and a 5 per cent drop in machine downtime.

The plant is one of nine named by the World Economic Forum (WEF) as the leading factories globally for embedding new technologies such as IoT into modern production. The facilities were selected from an initial list of more than 1,000 manufacturing companies based on their successful implementation of so-called “fourth industrial revolution” technologies.

Depuy Synthes, which employs more than 1,000 people at the Ringaskiddy plant, is a subsidiary of healthcare giant Johnson and Johnson. It manufactures orthopaedic products including hip and knee replacement joints.

The company first established operations in Cork in 1997. It carried out a €53.2 million expansion at the plant three years ago.

“The fourth industrial revolution doesn’t always mean newer, more expensive machines. Rather it can mean better communicating with and responding to the technologies you do have,” a spokesman for the WEF told The Irish Times.

“By implementing simple internet-of-things devices across a range of machines that were never intended to ‘talk’ to each other, the Depuy Synthes factory created real-time digital twins of its factory equipment to monitor performance,” he added.

Depuy and the other companies whose factories have been rated by the forum, have all agreed to open their doors to other companies to share their experience of merging new technologies with older ones.

Previous studies by the forum have revealed that more than 70 per cent of businesses investing in technologies such as big-data analytics, artificial intelligence or 3D printing do not take the projects beyond pilot phase due to unsuccessful implementation strategies.

This isn’t the first time Depuy has made the headlines for its use of technology. Late last month, the company announced it was partnering with the Science Foundation Ireland-funded materials science research centre Amber on a pioneering project aimed at developing 3D-printed biological implants to treat people affected by degenerative diseases such as osteoarthritis.

Among the other top factories selected by the WEF was a Siemens Industrial plant in Chengdu, China, that has used 3D simulation, augmented reality and other techniques to perfect the design and operations of its factory to increase output by 300 per cent and reduced cycle time.

Also, making the rankings was a Procter & Gamble plant in the Czech Republic that can instantly change production lines with a click of a button.