Review: It’s small, light and does the job on the go. 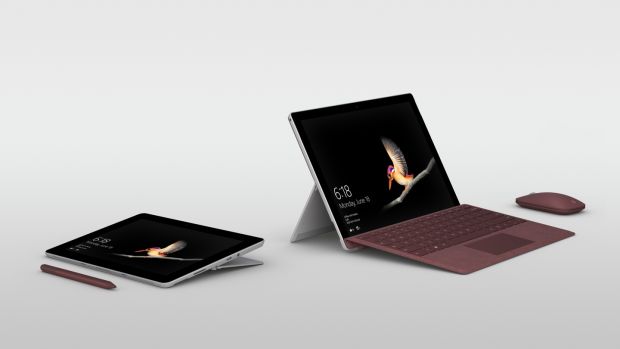 Remember the Surface 3? Microsoft’s tablet was intended to capture the Windows version of the iPad market, coming in at a much more affordable price than the Surface Pro. Up until fairly recently, it was also the only affordable two-in-one Surface option Microsoft offered.

But the launch of the Surface Go changes that.

Small, light and aimed at both an education and commercial market, the Surface Go slots in below the Surface laptop and Surface Pro in the family of devices. Part iPad competitor, part lightweight laptop, the two-in-one resembles a smaller Surface Pro. It comes with a 10-inch screen, but keeps the adjustable kickstand from the Surface Pro 4. Connections have been distilled down to a single USB C port, which will do everything from power to peripherals – as long as you have the right adapters. The good news is there’s also a separate power connection, which is the proprietary Surface charger. There is also a headphone jack and microSD slot.

Both versions are powered by an Intel Pentium Gold Processor 4415Y, one of Intel’s mobile processors that came with the Kaby Lake codename.

The Surface Go usually ships with Windows 10 in S mode, which restricts you to installing apps from the Microsoft Store. You can change it to regular Windows 10, and it’s easily done, but that’s a one-way trip. Once you change, there’s no going back to Windows 10 S.

But can the Surface Go replace a regular laptop? For many people, the answer will be yes. In fact, its Apple competitor can ably handle most tasks, unless you need proprietary software that hasn’t made its way into the App Store. So the Surface Go, with Windows 10 on board, will bridge the gap even more.

I used the Surface Go for a couple of weeks as my main work device, filing copy directly into our internal systems, editing photographs and trimming down the odd audio file here and there. I forgot I was using a different device at times – until I needed to hook something up to it directly.

That’s because the Surface Go has a single USB C port. That was fine for charging – phones are heading that way, so there are plenty of spare cables lying about. But unless the files I was working with were available in the cloud, getting them onto the device was a bit of a pain. You’ll need a USB adapter if you want to hook up the tablet to anything else, though, and I did miss my laptop’s regular USB connection on more than one occasion. Even if you do have one, you’ll have to bring it everywhere with you just in case.

But overall? I like it. It’s great for short trips because it’s just powerful enough to replace my laptop for a short period of time, and its takes up far less space in my bag.

The Surface Go fulfils its brief nicely. It’s compact but will still perform many of the tasks you’d ask of a larger laptop. The smaller size makes it ideal for travel or commuting, and unless you need a particularly high-powered laptop, you’ll find the Surface Go can ably take over.

You can also add extra storage to the Go with a microSD card.

That single USB C port is a pain. If you need to connect it to an external display, ethernet adapter or other peripheral at the same time, you’ll run into issues quickly. Plus if you want to connect a USB stick, you’ll need an adapter too. With cloud storage, wifi and other wireless connections, that’s not as much of an issue as it could be, but it’s not beyond the bounds of possibility that it could arise.

The accessories are extra, as they are for the iPad. It’s an extra €100 on top of the cost of the tablet, which might prove a bit too much for some, but it’s still cheaper than comparable tablet accessories.

Depending on the version you buy, the Surface Go ships with Windows 10 Pro or Windows 10 S, which limits what you can install on the devices. The latter is probably preferable for an education setting, but it can be switched to the unrestricted version of Windows 10 if necessary – similar to the Surface Laptop. It’s a one-way trip, though, so you need to be sure that you want to make the switch permanently. There are some advantages: security, because any apps you want to install have to be approved by Microsoft; more control in an education setting; and faster performance. But the limitations mean you’ll likely ditch S Mode as quickly as possible.

Travelling light? The Surface Go could be your new travel companion.

1 Empty offices on Mondays and Fridays spell trouble for businesses

5 RTÉ increases redundancy target of 60 after scheme is oversubscribed