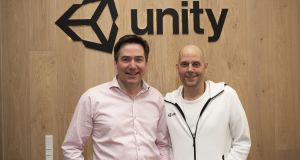 Unity Technologies, which recently acquired Irish software company Artomatix in a deal valued at up to $60 million (€52.8 million), is to create 100 jobs in Dublin over the next two years.

The move comes after Unity announced a new office in the docklands area of the capital after recently completing the acquisition.

Unity has developed a 3D video-gaming engine which is used to develop titles for mobile, VR, AR and traditional consoles. Apps made with Unity were installed more than 37 billion times in 2019. The company has more than 3,200 employees spread across 43 offices in 17 countries. It acquired Artomatix in a deal first announced in The Irish Times in late December but which has only just now been confirmed.

Artomatix has developed artificial intelligence (AI) software technology known as ArtEngine, that significantly cuts the cost of content creation for animated movies, video games and AR/VR applications through automation. The technology gives 3D artists the ability to speed up their workflow thanks to algorithms that can generate thousands of images based on the initial design and parameters that an artist provides.

Speaking to The Irish Times, Mr Blake said the acquisition was very good news for Artomatix as assisted artistry, which the company specialises in, is central to Unity’s plans.

“There is a massive demand out there for 3D content, obviously in gaming and in movies, but also in any industry that is doing product visualisation, so that includes aviation, the auto industry and so on. All of these are creating high-quality 3D content and currently there aren’t enough artists to go around,” he said.

“Obviously, our technology can play a role in helping companies to achieve far more than they would do otherwise,” Mr Blake added.

Unity was founded in Copenhagen in 2004 as Over the Edge Entertainment. Mr Blake said much of the company’s creative and technical people remain in Europe, a factor that should make integration of the company that bit easier.

“Unity has tremendous reach in the market with 50 per cent of all games shipped done so via it so they impact billions of people every day. They are investing huge resources in R&D already so they have a number of complementary initiatives that we can team up with and fast track,” he said.

“Merging with them will allow us to turn what was a three-year road map into a two-year one,” Mr Blake added.