At €2,500 it’s not a cheap option but the positives convinced me to make the purchase 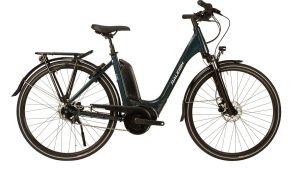 I have never been a natural athlete. Don’t get me wrong, I enjoy some activities – martial arts, dance classes when I was younger, a bit of Pilates here and there. But I’ve always had to work at it. I envy the people who claim that running clears their head and keeps them motivated; I’m only motivated to run when chased. I have a list of excuses as long as my arm, but the most compelling one is that I simply don’t have the time. I squeeze in a few Fiit sessions a week and that is about all I can manage these days.

So a bike seemed like a good way to get more exercise without having to magic up an extra few hours in the day.

The positives of that decision are many. I get a bit of fresh air (when not behind a truck or bus) in my day. I’m a lot more active than I would be sitting on a bus. And I have a predictable journey time because I’m not beholden to bus schedules and traffic patterns.

But there are negatives. I live up a rather steep hill. In case you didn’t notice, a lot of Dublin is a very gradual hill. That’s fine on the way in, but going home wasn’t as pleasant a journey.

The answer was investing in an electric hybrid bike. They aren’t the easy option that you may think: you have to pedal it, and the motor acts as an assistant rather than something that will propel you along.

The bike in question is the Raleigh Motus Tour Low-Step. My first proper bike was a Raleigh, so it seemed like a good idea to stick with a brand I recognised. This particular bike comes with a 400Wh battery, and four levels of motor assist.

The lowest is eco mode, which will get you more than 150km of range from the power pack, and provides only a moderate boost while you are cycling. It also means you’ll work harder than on higher modes; so if you are cycling for fitness reasons, this is probably the best option.

Tour mode is more for the leisurely cycle, while Sport gives you a bit more of a boost. The top mode is Turbo, which will cut your range to just over 50km from a full charge.

You’ll see all this on the display on the handlebars, which will also record your trip time and distance, your average speed and top speed, and your total mileage travelled on the bike. You can control it as you cycle with some buttons mounted on the handlebars that allow you to switch between the information on the screen and also move between the bike modes.

I got a few trips in and out of the office from each full charge, even switching things to Turbo mode for parts of the trip home.

There are a few advantages to the electric motor. There’s the aforementioned hills that put me off cycling before. There’s also the bit of a speed boost you get that can help you pull away from traffic lights and junctions a bit quicker, meaning you move out of the danger zone – and away from other cars – more speedily. And when I arrive at the end of my journey, I don’t feel like a red-faced mess, unlike previous non-electrically assisted attempts at commuting by bike. I feel like I’ve done some physical work, but not to the point where I launch myself at the sofa, unable to move for half an hour.

The big question is: would I buy it? Actually, I did, at MacDonalds electric bike shop in Rathgar. And yes, at full price. (Partly under the bike to work scheme, but that’s it. This isn’t a loan or a discount deal.) So I put my money where my mouth is, and now there’s a sizeable hole in my bank balance. But it’s one that the cost of commuting would have made anyway.

This is a good compromise for commuting. While the motor won’t protect you from the whims of Irish weather – or drivers – it will give an extra boost when needed. Going up hills or taking off from traffic lights is a little easier when you dial up the motor assist to Turbo. And as a bonus, you are getting a bit fitter too.

Not a cheap buy. At €2,500 the bike is an investment, and you can get cheaper if you are willing to sacrifice the size of the battery. On the plus side, that makes me even more determined to use it.

The battery can be disconnected from the bike to charge it in the house, if you don’t want to have your bike parked in the hall for the evening. Also, electric bikes have motors, which require maintenance and servicing, so factor that into the cost of ownership.

If you are considering making the jump to electric, the Raleigh Motus Tour Low Step should be on the list to consider.