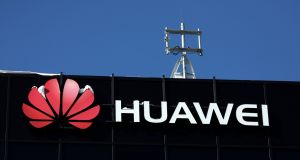 The US argues that 5G will be so fast – and have so many military applications – that the risk of using any Chinese telecoms equipment is too high. Photograph: Chris Wattie/Reuters

The British government has concluded that it can mitigate the risk from using Huawei equipment in 5G networks, in a serious blow to US efforts to persuade allies to ban the Chinese supplier from high-speed telecommunications systems.

The UK National Cyber Security Centre has determined that there are ways to limit the risks from using Huawei in future 5G ultra-fast networks, said two people familiar with the conclusion, which has not been made public.

The finding comes despite stepped-up US efforts to persuade countries to bar Huawei from their networks on the basis that it could help China conduct espionage or cyber sabotage.

The US National Security Agency has been sharing more information with allies and partners to underscore the risks, but several European countries, including the UK and Germany, have not been convinced that a ban is warranted.

One person familiar with the debate said the British conclusion would “carry great weight” with European leaders, since the UK has access to sensitive US intelligence via its membership of the Five Eyes intelligence-sharing network.

“Other nations can make the argument that if the British are confident of mitigation against national security threats then they can also reassure their publics and the US administration that they are acting in a prudent manner in continuing to allow their telecommunications service providers to use Chinese components as long as they take the kinds of precautions recommended by the British,” the person said.

The US argues that 5G will be so fast – and have so many military applications – that the risk of using any Chinese telecoms equipment is too high. American officials have also made the case that, although there may be no evidence of nefarious activity so far, Huawei could use malign software updates to facilitate espionage.

It also comes as Donald Trump is considering issuing an executive order that would effectively bar US companies from using Huawei.

Speaking at the Munich Security Conference on Saturday, US vice-president Mike Pence said Huawei posed a threat because of a law that requires telecom companies to share data with the Chinese government.

At the same forum, Jens Stoltenberg, Nato secretary-general, said that the alliance was taking concerns over Huawei “very seriously” and that several allies wanted a co-ordinated response.– Copyright The Financial Times Limited 2019