Five-year plan to bring fibre to 1.4m homes, including all towns with more than 1,000 homes 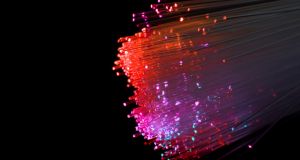 Eir plans to invest €500 million in a new fibre broadband network that will supply 1.4 million premises across the State. Photograph: Andy Brown/Hemera/Getty

Eir plans to invest €500 million in a new fibre broadband network that will supply 1.4 million premises across the State, including every town with more than 1,000 homes.

The announcement is seen as a major play by the State’s largest telecoms group to regain market share from Virgin and Sky, particularly in urban areas.

The company said the new fibre-to-the-home (FTTH) network represented a major overhaul of its existing infrastructure and would take five years to construct.

Work on the project will commence later this year with approximately 75,000 homes being passed each quarter. It will be capable of delivering broadband speeds of 10 Gbps (gigabits per second), way in excess of anything available here at the moment.

Eir’s investment will follow the completion in June of its rural broadband roll-out to 335,000 homes at a cost of €250 million. The homes were controversially removed from the National Broadband Plan (NBP), the State-backed scheme, at the last minute.

The Government is still deliberating on the final and only bid for the NBP project from US investment firm Granahan McCourt and is expected to make a decision in the coming weeks.

The NBP process has been beset with problems and delays since it was first announced back in 2012.

Eir chief executive Carolan Lennon said she expected the scheme would take five to seven years to complete, which is significantly longer than previously thought, because of the complexity of the tender and “the challenge of building in rural Ireland”.

This could stretch out the timeline for delivery to 2026. The Government has previously signalled that the last homes would be connected by 2022.

Eir had been favourite to win the State contract but dropped out of the process a year ago, saying there was no longer a business case for its continued involvement.

Ms Lennon, who took over at the helm last year after the company was acquired by a consortium of investors led by French billionaire Xavier Niel, said she expected the winning bidder would use Eir’s existing network to get at the 540,000 homes earmarked for the plan.

In an attempt to address the company’s poor customer service image, Ms Lennon said it was bringing back “in-house” 750 new Eir employees at three regional hubs in Sligo, Cork and Limerick.

“I am delighted to announce this substantial imvestment of more than half a billion euro, which is a key step in the evolution of Eir’s network, and indeed of the entire telecoms infrastructure in Ireland,” she said.

“Eir is by far the largest investor in telecoms in Ireland and over the past five years we have spent €1.5 billion on our network,” she said.

The company also announced a €150 million investment programme in its mobile network, which will allow Eir deliver 4G voice and data coverage to most of the State within two years. The investment will also see the roll-out of 5G services in 2019.

Separately rival telco Siro announced a €14 million investment in its own fibre network, which will extend it to six new towns in Donegal – Buncrana, Donegal Town, Ballybofey, Stranorlar, Ballyshannon and Bundoran.

This will see over 14,000 homes and premises offered access to superfast broadband services.

1 ‘No demand... because there are no people’ at well-known Dublin pub
2 Revised help-to-buy scheme opens for applications
3 AIB concedes Covid mortgage policy was ‘regrettable’
4 Harvey Norman targets Irish property developers
5 ‘Saudi Arabia is where the opportunities will happen in future’
Real news has value SUBSCRIBE