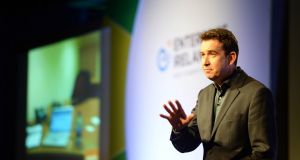 Recently filed documents show the start-up secured the funding from a company called DK Investment LLC, with a registered address at the Corporation Trust Center in Wilmington, Delaware.

Mr Little declined to comment to The Irish Times on the latest fundraising by his company.

Delaware has in recent years become a location for those seeking to take advantage of the so-called “Delaware Loophole”, which allows companies to minimise their tax bills.

Some of the world’s biggest multinationals, including Apple and Coca-Cola, are registered at the Corporation Trust Center in Wilmington.

Web Summit founder Paddy Cosgrave, who has been highly critical of the Republic of Ireland’s corporate tax regime, is among those who have taken advantage of the legal loophole by registering an investment fund he co-founded in Delaware.

Nearly half of all public corporations in the US are incorporated in the state.