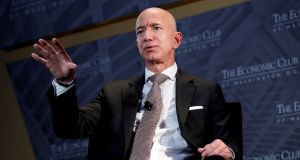 Amazon chief executive Jeff Bezos is daring rival retailers in the United States to raise their minimum wage to $16 (€14) an hour.

Mr Bezos laid down the challenge in his annual shareholder letter, published on Thursday. The entrepreneur routinely uses the letter to outline his long-term strategy, which made him the world’s wealthiest man and Amazon one of the most valuable companies.

“Today I challenge our top retail competitors (you know who you are!) to match our employee benefits and our $15 minimum wage,” Mr Bezos said. “Do it! Better yet, go to $16 and throw the gauntlet back at us. It’s a kind of competition that will benefit everyone.”

The company in October pledged to pay all of its warehouse workers at least $15 an hour, after presidential hopefuls Bernie Sanders and Elizabeth Warren held out Amazon workers on food stamps as an example of the need for living-wage protections.

This was Mr Bezos’s first shareholder letter since his personal affairs became tabloid fodder. The chief executive in January announced his divorce from his wife of 25 years, Mackenzie Bezos, and the couple last week announced a settlement that leaves Mr Bezos with 75 per cent of their stock in the company. He remains Amazon’s biggest shareholder.

Mr Bezos made no direct mention of the divorce in his annual letter, maintaining distance between the company’s operations and his personal life.

The businessman included his 1997 shareholder letter to remind investors of his ability to capitalise on how the internet would change the nature of shopping.

His strategy and outlook have developed a cult-like following similar to that of Warren Buffett, whose annual letters to Berkshire Hathaway investors are must-reads for those looking to understand the economy and Mr Buffett’s investment strategy. – Bloomberg

1 Caveat: Irish tourism must also help itself to survive the pandemic
2 ‘Saudi Arabia is where the opportunities will happen in future’
3 What will the office market look like after the great remote working experiment?
4 Two men face fraud charges over £1.2bn sale of Nama’s NI loans
5 Marlet secures €65m from AIB for Dublin docklands build-to-rent scheme
Real news has value SUBSCRIBE