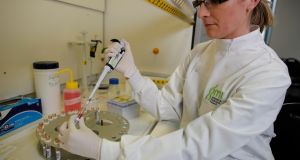 The private Irish genome research company GMI, which has ambitious (and alarming) plans to gather DNA from 400,000 Irish people, is back in the news.

Interestingly, Wu Xi PharmaTech is the target of a new class-action lawsuit in New York for share-selling irregularities.

Media coverage generally has focused on GMI’s intention to hire 600 people, not the massive-scale DNA data acquisition plan its chief executive says will make Ireland a global hub for genomics.

A Sunday Business Post story two weeks ago, headlined “Genetic data company seeks clarity over new GDPR rules”, stated that GMI had written to Department of Health officials to state it “urgently needs clarity” on “new” details that might affect its acquisition of data, and storage of DNA databases or so-called biobanks.

GMI fretted that “uncertainty” was affecting its ability to make “everyday business decisions”. The correspondence was interesting and revealing, though there is confusion regarding its context.

There are no “new GDPR rules” coming that relate to genetic data.

Asked about this correspondence, a GMI spokesperson told me: “In October 2018, GMI sought guidance from the Department of Health on how the new Health Research Regulations 2018 [HHR] would work in practice in relation to the processing of personal data for health research purposes in Ireland.”

GMI also wanted to know “how the regulations would work in the context of research that had been approved by Research Ethics Committees in Ireland prior to the enactment of the regulations and whether or not there would be an extension to the deadline of April 31st, 2019, for submissions to the new Health Research Consent Declaration Committee.”

The HHR must comply with GDPR, not least because sensitive medical and DNA data is protected by stringent GDPR gathering, handling and storage provisions.

However, as a public note this week from the Department of Health indicated, more specific guidance is needed in HHR, with any changes serious enough to require consultation with the Office of the Data Protection Commissioner, the Department of Justice and the Attorney General.

The department’s note is an update in an ongoing, delayed process to clarify issues around consent.

On the department’s side, it beggars belief that these key issues were not worked out during the two-year transition period between GDPR’s publication and its enactment a year ago. Current uncertainty places researchers, health workers and citizens in an extended limbo.

Some of GMI’s correspondence is baffling too, and the answers are already clear within GDPR.

GMI warns the department that the “absence of clarity” might lead “potentially to research projects being located in other jurisdictions” – though this seems questionable given that GMI’s goal is acquiring and controlling the research goldmine of a massive databank of homogenous Irish DNA.

It’s strange that an already operational EU-based DNA company is asking a government department for clarification on some basic GDPR data consent, transfer and governance issues.

Controversy regarding consent has already arisen over the transfer by Our Lady’s hospital in Crumlin of the DNA records of 1,500 Irish children to GMI in 2016 .

“The requirements to have informed consent either for biomedical research or for processing personal data are far from new,” says Dr Katherine O’Keefe, head of training and research, and ethicist with data consultancy Castlebridge, who has co-authored a book on data ethics. “All but one of the core data-protection principles have been in Irish law since 1988.”

She adds: “Asking for an exemption from the requirements for consent for data that GMI already has, now raises the question why GMI doesn’t have the proper documentation of consent from when they obtained the data.”

Data controllers cannot transfer data obtained in the EU, outside the EU without giving it the same protections under GDPR. If the biobank were in China, this would also raise concerns as the state is widely considered a leading surveillance nation .

GMI may have laudable intent – new treatments for conditions and diseases via its DNA research. But this is not open, public research. GMI is a private business, seeking to monetise personal DNA data.

Currently, private companies funding or doing such research exist in a grey area of vague international regulation. This troublesmedical and data ethicists.

While GMI wants “clarity” and answers from the government here, the Irish people deserve clarity and answers from GMI – and the Government. Given the scale of this DNA project, we are overdue an in-depth public and political discussion on this project to biobank a tenth of the Irish population’s DNA for private profit.

1 ‘I’m so lucky to be in the Caribbean – a million miles from Derry Girls’
2 ‘The recovery needs to be a full-scale economic renewal’
3 Tax and the Pandemic Unemployment Payment: Your questions answered
4 Joint accounts: if one of us dies, can the other access the money?
5 Why talent matters even more than you think
Real news has value SUBSCRIBE