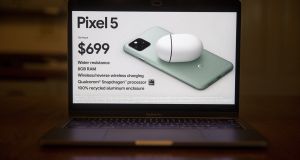 The latest addition to the Google line up is the Pixel 5, the company’s flagship phone that will go head to head with Apple’s new iPhone when it lands. It is almost all-screen, with a small hole-punch in the screen for the camera. The 5G enabled phone is available with a 6-inch screen, instead of the regular and XL models that the company previously released. The phone also adds a portrait mode for darker environments, and an 8 megapixel front-facing camera.

The Pixel 5 ditches facial recognition and last year’s Pixel 4 Project Soli motion sensor, reverting to a fingerprint sensor for those who want to use biometrics to secure their device. The reason? Google’s hardware chief Rick Osterloh, said the company didn’t want to price consumers out of the market.

There is also a wireless charging option, so you can charge Pixel Buds on the reverse of the phone, and a low-power mode to eke out more battery life.

Google also unveiled a new Pixel 4a 5G, the company’s mid-range smartphone with extra 5G capabilities, a 6.2 inch screen and a faster processor.

Both phones are set to be released on October 15th.

1 Black Friday has become Black November for Irish retailers
2 How long can Government afford to keep State pension age at 66?
3 Top gadgets to help make your home safer this winter
4 Marquees and fleets of delivery vans: how supermarkets are ready for Lockdown 2
5 Ulster Bank tells ‘deeply concerned’ Minister no decision yet on future
Real news has value SUBSCRIBE