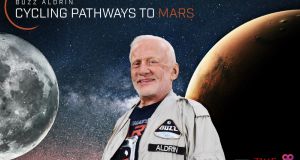 Buzz Aldrin: Cycling Pathways to Mars is a 10-minute virtual reality movie in which Aldrin’s hologram follows the viewer as they travel from the Moon to Mars

Former astronaut Buzz Aldrin might have the honour of being the second person to walk on the moon, but he says he wants to be remembered for more than just “kicking up moon dust” .

Aldrin has teamed up with mixed reality movie-makers 9i and Time Inc’s Life VR to show the world his plans for establishing a permanent human settlement on Mars.

Buzz Aldrin: Cycling Pathways to Mars is a 10-minute virtual reality movie in which Aldrin’s hologram follows the viewer as they travel from the Moon to Mars while learning about Aldrin’s vision for inhabiting the red planet.

This short film is available free on Steam and Viveport for the HTC Vive, and coming soon to the Oculus Rift. If you don’t have a VR headset but are curious there is a short 360 trailer available on YouTube and through the Life VR app for Android and iOS.

1 Chris Johns: Boohoo exposed on pay and conditions in digital economy
2 In this strangest of recessions, what happens next for Ireland?
3 Hotel bookings collapse in wake of additional Covid restrictions
4 Michael O’Leary is the boss you want to lead an airline out of crisis
5 Estée Lauder staff at Dublin airport plan further strike action
Real news has value SUBSCRIBE