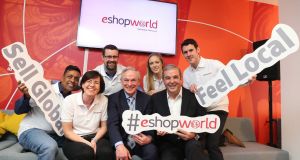 Ecommerce firm eShopWorld is to create 250 jobs over the next three years as part of a €25 million investment.

The Swords-based company’s announcement comes after it created 80 jobs in 2016. If the job plan remains on track, it will employ almost 400 people by 2019.

Recruitment has already begun for the roles, which will be in technical development and research and development activity, and are intended to develop its ecommerce offering.

The company said the majority of the jobs will be in Swords, where the company officially opened its global headquarters at Airside Business Park on Monday.

“We are very pleased to be adding jobs and investment to fulfil demand from leading global brands. Premium brands see our technology platform as a key pillar for growth and establishing long-term sustainable relationships with brand-loyal customers,” said chief executive and founder Tommy Kelly.

“This is a really important investment for eShopWorld and one that will further our capability to optimise our technology, driving growth through existing and new revenue streams.”

The €25 million investment is focusing on people, software development and R&D over the next three years.

Launched in 2010, eShopWorld provides bespoke ecommerce solutions and has operations in Dublin, Newry, the United States, Singapore and the Netherlands. The company works with well-known sportswear and clothing brands such as Victoria Secret.

It was named Ireland’s fastest-growing tech company by Deloitte in its Fast 50 last year, the second year it received the accolade.

The announcement was welcomed by Minister for Education and Skills Richard Bruton.

“Here is an innovative Irish company, established six years ago, which now employs 150 people and has a turnover of over €200million,” he said. “ Today’s announcement that eShopWorld are creating 250 jobs in Ireland is a great boost and a huge indication of what’s possible.”