Unapologetic European Commission insists it will defend its decision in court 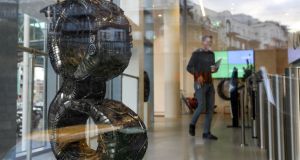 Google shopping: the tech giant is contesting its EU fine for favouring its own services over its rivals’. Photograph: Chris Ratcliffe/Bloomberg

Europe Editor Google has lodged its appeal to the European Court of Justice over the €2.4 billion fine imposed on it by the European Commission’s competition directorate for favouring its shopping service in search results.

The appeal, which the Luxembourg-based court has confirmed receiving, will take some time to be heard and is likely to result in prolonged, expensive hearings, but an unapologetic commission on Monday insisted that it will “defend its decision in court.” The company told the AFP news agency that it had no comment.

The European Union, of which the court is a part, is also expected to soon decide another case against Google over abuse of its dominance of internet search to strengthen its Android mobile operating system.

The EU hit Google with the record fine in June – the previous record had been a fine against the chipmaker Intel, in 2009 – and gave the company 90 days to comply or face further fines. The company last week confirmed that it would comply, and the fine will be paid into a frozen account, pending the appeal.

The fine had come less than a year after Margrethe Vestager, the Danish competition commissioner, had announced that Apple, the iPhone manufacturer, must pay ¤13 billion in back taxes to the Republic of Ireland – against Dublin’s wishes.

The court ruled that a lower court did not give sufficient airing to Intel’s defence. It rejected the commission’s claim that it didn’t need to prove harm, as the rebates were inherently illegal given Intel’s dominant position in the market for a certain kind of microprocessor.

It was the first time in more than 20 years that the commission had lost on appeal. Lawyers suggest Google is unlikely to have similar luck.

1 Dracula scenario for Irish economy: second outbreak and no-deal Brexit
2 Ireland faces 'deep downturn' this year and may not rebound until 2024 if there is a second wave
3 Why the Fed thinks Goldman is America’s riskiest bank
4 Why are markets booming when a crash is on the way?
5 ‘The rental situation stops me moving back home’
Real news has value SUBSCRIBE