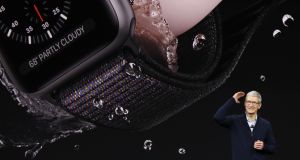 Tim Cook, chief executive of Apple, speaks as product images are shown behind him during a launch event in Cupertino, California, US. Photograph: Stephen Lam/Reuters

Apple’s new iPhone X will cost £999 but will not ship until November, the group announced on Tuesday, testing both the patience and price sensitivity of its customers.

The complexity of manufacturing new kinds of screens and cameras inside what analysts called its “super premium” new iPhone is likely to be behind the delayed launch. Normally, iPhones go on sale at the end of September.

Shares in the world’s most valuable company slid by 1 per cent as the later-than-expected launch was announced.

Apple chief executive Tim Cook billed the new iPhone X as “the biggest leap forward since the original iPhone”, as he unveiled a total of three new models of its 10-year-old smartphone at a launch event on Tuesday.

With the new top-tier iPhone X, Apple is ditching the home button that has sat at the bottom of the device since it was first unveiled in 2007.

The new iPhone X will “set the path of technology for the next decade”, Mr Cook said, as he showed off an OLED screen that runs right up to the edge of the casing and a new camera capable of high-resolution facial recognition.

In the UK, customers will face an eye-popping price tag as Apple has swapped the dollar sign for a pound and is selling the iPhone X for £999.

In the US, the top price for the iPhone X will be $1,149, including 256GB of storage, according to its website.

The iPhone 8 and 8 Plus have improved cameras, displays and processors, but broadly similar designs to the iPhone 7, albeit with a new glass back.

As well as the higher-priced X model, Apple is also increasing the starting price of its iPhone 8 from about $650 last year to $699.

“The iPhone X and iPhone 8 models are very strong additions to Apple’s portfolio that address increasing competition from Samsung and others,” said Ben Wood, analysts at CCS Insight. “Rivals will be watching how quickly Apple can meet demand for the iPhone X and begin to build margins on a new design with new components.”

Because of the complexities in manufacturing its new OLED screen, “the relatively high prices of the iPhone X are a necessary and important mechanism to control demand in the near term”, Mr Wood added, calling the $999 cost a “super premium” to other smartphones and the rest of Apple’s line-up.

Pre-orders of the iPhone X will begin at the end of October, with the first handsets shipping out to customers on November 3rd.

The company has sold more than 1.2 billion iPhones over the past decade and ushered in the era of mobile computing, but last year had a substantial decline in revenue as many consumers rejected the iPhone 7 as being too similar to the iPhone 6.

At the first event to be held at its new Cupertino campus, Apple also unveiled updates to its TV box, adding 4K resolution, and its Watch, bringing cellular wireless connectivity. – Copyright The Financial Times Limited 2017