Tech executives reject claims at US hearing they are too powerful

Bezos, Cook, Pichai and Zuckerberg all testify before US congressional hearing 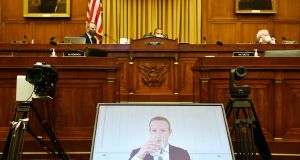 Some of the biggest names in tech were grilled by lawmakers on Capitol Hill on Wednesday amid increased scrutiny of technology companies by lawmakers across the political aisle in Washington.

Amazon founder Jeff Bezos made his first appearance at a congressional committee in the 26 years since he founded the world’s most valuable retailer, while the chief executives of Apple, Facebook and Google’s parent company Alphabet returned to the committee room, albeit virtually.

Though ostensibly a hearing on anti-trust issues, the chief executives faced a range of questions via video-link, including on privacy, electoral interference and alleged anti-conservative biases on their platforms.

While Mr Zuckerberg said that Instagram did compete with Facebook on photo-sharing, it was also a “complement” to Facebook. He argued that at the time of the acquisition Instagram had many competitors, and there was “no guarantee that Instagram was going to succeed”.

He also said that Facebook had made “the most advances that any company or country” in the world to protect the integrity of elections in the wake of widespread Russian interference in the 2016 US presidential election.

“We have hired more than 30,000 people to work on safety and security, built up AI systems to find harmful content,” he said.

Mr Pichai said his company wanted to “serve all our users”, noting that there were “more conservative voices than ever before,” particularly on YouTube. “We believe in freedom of expression.”

Mr Bezos highlighted Amazon’s contribution to the US economy, stating that it had doubled the minimum wage it pays its staff, offers the best benefits of its competitors, and had “a deep culture of risk-taking”.

“We treat all app developers the same,” he said, disputing allegations that Apple favours some developers over others.

The hearing reflects an increase in concern about the perceived dominance and monopoly practices of some of America’s most valuable companies.

Massachusetts Democrat David Cicilline, the chair of the sub-committee of the judiciary committee, said these companies had “already stood out as titans in our economy” before the coronavirus pandemic.

“In the wake of Covid-19, however, they are likely to emerge stronger and more powerful than ever before. As American families shift more of their work, shopping, and communication online, these giants stand to profit. Locally-owned businesses, meanwhile – mom and pop stores on main street – face an economic crisis unlike any in recent history.”

Describing the four companies as “emperors of the online economy”, he compared them to previous monopolies such as oil giants and railroad operators, as well as companies like AT&T and Microsoft.