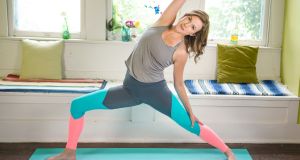 Adriene Mishler, presenter of popular YouTube channel Yoga with Adriene. Some 40% of Irish people say they will continue with online fitness classes.

Broadband played a significant role in supporting the physical and mental wellbeing of people during the Covid-19 lockdown, a new study suggests.

Data use surged by 40 per cent during the lockdown, Virgin Media Ireland said, as people worked from home, and streaming services and Zoom quizzes became the new entertainment.

A survey carried out by Amárach Research for Virgin Media Ireland found people turned to the internet more regularly for health-related information and support during lockdown, with about half of people saying they had accessed videos, podcasts, blogs and social media specifically to support their wellbeing.

The majority of those surveyed said their physical health remained good during the pandemic, but around 40 per cent felt that their mental health ranged from poor to middling.

The research found 60 per cent of people participated more often in online fitness competitions against family, friends and colleagues through connected activity trackers such as Fitbits and smartwatches. About 30 per cent said this would continue.

Some 40 per cent of people said they would continue to watch online videos and listen to podcasts about diet, health and fitness.

Almost two-thirds took part in live, online fitness and training classes more often then they usually would, with 30 per cent planning to continue.

“Seeing data usage increase by 40 per cent shows our customers are using their service more than ever before but what’s fascinating is what people are using it for.”

He pointed to a surge in video usage across the Virgin Media network and a 52 per cent rise in connected devices. “The research shows more people engaging with live fitness classes taking place over Zoom and other platforms, which is also driving some of this increase,” he said.

“Broadband and connectivity have a key role to play in the country’s ongoing renewal, recovery and future continuing success.”