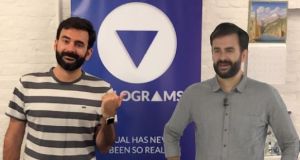 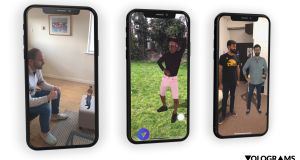 Vologram is hoping to bring dynamic 3D holograms to mobile 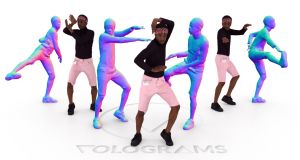 Volograms, a start-up that is developing technology which can record footage of real people and then use this to create a dynamic 3D hologram of them for use in a wide range of content, has raised €1.5 million in funding.

The reality capture and volumetric video company was founded in 2018 by Rafael Pagés, Konstantinos Amplianitis and Jan Ondrej, three post-doctoral researchers who worked together at V-Sense, a leading visual computing research group based at Trinity College Dublin.

It uses a number of cameras to capture moving images of people and then transforms these into volumetric holograms – or volograms – for use in augmented and virtual reality (AR/VR) settings. In particular, the start-up envisages enabling mobile phone users to insert their own volograms into video and share these with others across social media and in content for use in apps and VR headsets.

Mr Pagés told The Irish Times that Volograms is on a mission to help creators “blur the lines between real, augmented and virtual realities”.

Volograms has already partnered with companies such as Samsung, as well as the Royal College of Surgeons in Ireland and The London College of Fashion at The University of the Arts, London, on projects.

Its technology works with different camera configurations, outdoor or indoor scenarios, and can also generate content with videos captured with handheld consumer devices. While there are some rivals in this space, including well-known names such as Microsoft, Mr Pagés said Vologram’s technology relies on fewer cameras and configurations than any of its counterparts.

“There are a bunch of companies that are providing reality capture technology similar to this and a lot more who are interested in getting into the space, but we’ve come up with a solution that we believe is easier to set up and use and also cheaper,” said Mr Pagés.

“Some of the clients we work with have, say, 84 cameras in their studios to capture images and we know Microsoft Studios uses 106 cameras in its set-up. We can work at that kind of scale but also with simpler set-ups, too. For example, the studio we have at Trinity College has just 12 cameras,” he added.

Mr Pagés said the “holy grail” was to be able to shrink its technology further so that it could fit on a phone.

“This technology is going to be everywhere and it is our ambition to bring volograms to everyone,” he said.

The funding round has been led by Sure Valley Ventures, with the Atlantic Bridge University Fund and Enterprise Ireland also participating.

Sure Valley, which was founded by Irish entrepreneur Barry Downes, has backed a number of Irish companies, including Ambisense, Wia, Nova Leah, Get Mobility War Ducks, VR Education and Artomatix, which was recently acquired in a $60 million deal by Unity Technologies.

“We believe that Volograms is opening a new market category for AR photos and video. This category will have much greater appeal for content creators and social media users than the existing static 3D content solutions on offer. Volograms’ technology will usher in the rapid expansion of the mobile AR industry,” said Mr Downes.