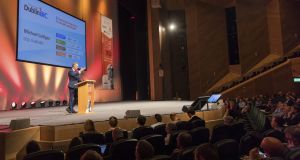 Futurescope: Tech entrepreneurs and recruiters called for incentives to be introduced to the market, to boost competitiveness

More tax incentives for entrepreneurs and access to talent were among the key topics of discussion at the annual Futurescope event in Dublin earlier this week.

Given that the event is largely aimed at techies it’s hardly surprising that this was the case. The issue of better incentives to support those sufficiently brave (or foolish) to start their own business has long been a bone of contention, as has being unable to offer share options to staff without paying a high price.

This was an issue long before the UK government moved in its last budget to make it more attractive for entrepreneurs to base their businesses there. The perceived failure of our Government to respond to this has riled those seeking to boost entrepreneurship here.

CarTrawler chief technology officer and serial entrepreneur Bobby Healy was among speakers to touch on the issue at Thursday’s event. He told attendees that the lack of incentives made it unappealing for those wanting to back fledgling businesses.

Anne Heraty, the founder and chief executive of Dublin-listed tech recruitment company CPL, also spoke out on the issue.

“I’m passionate about the fact that the tax system needs to be modified and made more competitive to promote entrepreneurship here,” she said, describing the UK as being “much more competitive” in terms of tax benefits and share options.

But while financial rewards are critical in terms of luring talent, they aren’t the be all and end all, according to entrepreneur John Beckett.

Beckett, who helped to develop Ryanair’s first website while still at school, before establishing ecommerce technology company ChannelSight, said with tech giants such as Google and Facebook around to pay top dollar for developers, it’s impossible to try to match them.

“We can never compete on price. The likes of Google can pay double the salary we can because we just don’t have the budget,” he said.

“However, I believe that start-ups can compete in terms of what they offer because with companies like ours you can get to work on exciting tech and help to shape the business. In contrast at somewhere like Facebook, you might get paid significantly more but you’ll likely end up sat in a cubicle writing code for a project that likely won’t even get seen,” he added.