ReliaQuest and Wrike both planning to add employees 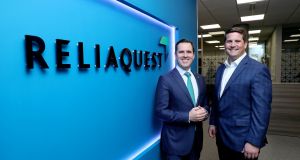 Two technology companies have confirmed plans to significantly increase their staff numbers in Dublin as they expand their respective European headquarters to meet demand.

ReliaQuest opened its first office outside the US with plans to create 100 jobs in the next three years. In its security operations centre the cyber-security company will employ engineers, analysts and content developers.

“We are excited to open this new office in Dublin in order to expand our international presence and serve our growing customer base in Europe, ” said Brian Murphy, ReliaQuest’s founder and chief executive, adding that Ireland’s “highly skilled workforce” was an attraction for the company.

The jobs, supported by inward investment agency IDA Ireland, will be based in Leopardstown, from where the company will service customers in the US and Europe.

While Mr Murphy could not disclose clients of ReliaQuest, he told The Irish Times that it has a “lot of customers with massive operations here in Dublin and companies that are headquartered here”.

ReliaQuest works with security teams focusing on customers to combine existing tools so there aren’t cyber-security gaps. Traditionally the company has been called upon in the event of a cyber attack, but Mr Murphy says companies that invest in cyber-security will see benefits such as enhanced data use.

“Ireland has become a significant base of international technology and security companies thanks to a growing, well-educated and flexible workforce with a rapidly increasing graduate output,” said IDA Ireland chief executive Martin Shanahan, adding that he was “delighted” the company chose Ireland as the location for its international expansion.

Elsewhere, work management technology company Wrike opened a new office in Dublin on Wednesday with plans to add another 50 jobs here in the next three years.

The California-headquartered company has also opened new offices in San Diego and Melbourne.

Wrike’s Europe, Middle East and Africa (EMEA) headquarters is based in Dublin, where it opened its first office in June 2015. Since then, the company has added 80 jobs and increased revenues in the region by 347 per cent.

The privately-held company provides a single digital platform with features tailored for project management. Its clients include Google, Jaguar Land Rover and Mars.

1 Second Covid-19 outbreak and no-deal Brexit an appalling vista
2 Ireland faces 'deep downturn' this year and may not rebound until 2024 if there is a second wave
3 Why are markets booming when a crash is on the way?
4 ‘The rental situation stops me moving back home’
5 Supreme Court clears Bernie Madoff Ponzi loss case for hearing
Real news has value SUBSCRIBE