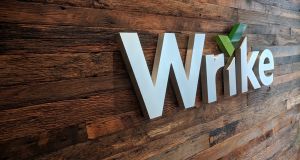 Work management technology company Wrike opened a new office in Dublin on Wednesday and aims to add another 50 jobs here in the next three years.

The California-headquartered company has also opened new offices in San Diego and Melbourne.

Wrike’s Europe, Middle East and Africa (EMEA) headquarters is based in Dublin, where it opened its first office in June 2015. Since then, the company has added 80 jobs and increased revenues in the region by 347 per cent.

“We have had incredible success since opening the first Dublin office and it gives me great pride to say that EMEA is the company’s fastest growing region,” said Wrike vice president of sales and general manager of EMEA Patricia DuChene.

“There is still tremendous opportunity here, in terms of talent and market share, and we are just getting started in EMEA,” she said.

The new Melbourne office will service the Asia-Pacific (APAC) region while the San Diego opening is the company’s second office there.

Wrike has more than 18,000 customers and nearly two million users. Founded in 2006, the company has raised $26 million (€22.9 million) in funding rounds including through venture capital houses Bain Capital and Scale Venture Partners.

“We have tripled our worldwide headcount over the last three years and we plan to double in size within the next three. More and more companies are adopting collaborative work management tools to help them overcome the challenges presented by digital transformation and we intend to make Wrike the platform enterprises rely on,” the company’s chief executive, Andrew Filev, said.

1 What is Covid Tracker Ireland?
2 British holiday home rental company exits Irish market
3 Ireland’s economy forecast to shrink 8.5% due to Covid-19 pandemic
4 Will family’s tax debt stop me getting my inheritance?
5 Why gift a son now if it eats into his tax-free inheritance threshold?
Real news has value SUBSCRIBE