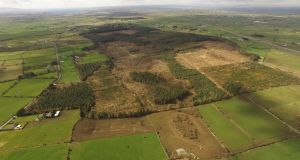 The site of the proposed Apple data centre in Athenry. While Apple is not now proceeding with the project, the court’s decision is likely to affect the board’s consideration of similar data centre developments

The Supreme Court will sit in Galway next March to hear an appeal over whether An Bord Pleanála breached its legal obligations in how it approved the first phase of Apple’s planned €850 million data centre in Athenry.

While Apple is not proceeding with the project, the court’s decision is likely to affect the board’s consideration of similar data centre developments.

Sinead Fitzpatrick, who lives close to the planned development, and Allan Daly, of Athenry, are appealing the High Court’s dismissal of their challenge concerning how the board dealt with the company’s proposal.

The appeal is opposed by the board and the State, but Apple is not involved.

On Wednesday, the Chief Justice, Mr Justice Frank Clarke, on behalf of the five-judge Supreme Court, issued a judgment setting out the precise issues to be addressed in the appeal.

That judgment arose because the board had complained the appellants were seeking to put forward grounds which, the board contended, were inconsistent with, or different from, the grounds they pursued in the High Court.

The Chief Justice said the court, as well as deciding the scope of the appeal, had also decided it was not necessary, at this stage, to make a preliminary reference of questions to the Court of Justice of the EU for determination.

The court may be persuaded, when the full appeal is being heard, that there remains a question which truly is an issue of European law which requires to be referred, he said.

It remains open to the parties to suggest, during the full hearing, that a reference is required, he stressed.

He also told the sides the appeal would be heard on March 6th in Galway as part of the Supreme Court programme of sittings outside Dublin. There is a link between this appeal and Galway, he noted.

The case arose after Apple got planning permission from the board on August 11th, 2016 for a development of one data hall and associated grid connection at Athenry.

In Wednesday’s judgment, the Chief Justice said the central thrust of the appellants’ case relates to the extent to which the board is obliged to assess the environmental impact of the balance of the Apple “masterplan” for eight data halls as part of the Board’s obligation to carry out an Environmental Impact Assessment (EIA).

He did not see any prejudice would be caused to the board if the court explored the precise extent of the obligations on the board to consider the potential impacts of the remainder of the masterplan.

The appellants are entitled to argue the board is obliged to carry out a full EIA on the entire masterplan, “subject only to the limits of practicality”, he ruled.

They were also entitled, as a “fall-back position”, to suggest the board was obliged to assess environmental impacts in a manner that falls short of the appellants’ primary case but which exceeds the EIA actually carried out by the board.

Once the court decides the board’s precise obligations, it can consider whether the assessment actually conducted by the board fell short of those obligations, he ruled.

The appellants must now formulate their grounds of appeal in line with the court’s rulings as to scope, he said.

1 Flights abroad ban could last all summer
2 Chris Johns: Economic self-harm is the root of populism
3 UK expected to phase Huawei out of 5G network
4 ‘The rental situation stops me moving back home’
5 How much do Irish people earn? And what will Covid-19 do to our wages?
Real news has value SUBSCRIBE