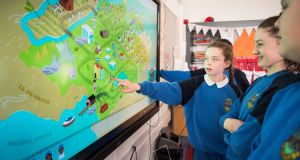 Project Honduras, an award-winning computer game developed by charity Trócaire, has launched. The strategy game, which is based on the real-life experiences of two young climate activists, recently won the International Educational Games Competition in France.

On the shortlist for a Dochas Innovation Award as well, the game’s primary aim is to show how important it is for communities to work together to combat climate change.

Aimed at 10- to 14-year-olds, it was designed in consultation with workers at Trócaire’s Honduras office and is set to be translated into Spanish for use in the region.