Teamwork reports rise in revenues as it rides out Covid crisis

Former Entrepreneur of the Year award winner beefs up executive board 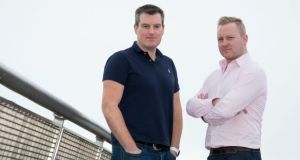 Irish software company Teamwork recorded a 20 per cent rise in revenues to $26.7 million (€22.5 million) in 2019 as losses widened due to increased investment during the year.

Founded in 2007 by Daniel Mackey and Peter Coppinger, Teamwork is a software-as-a-services (SaaS) company whose clients include Disney, Netflix, Forbes, Paypal and Spotify.

The company, which creates business management applications, currently has more than 24,000 paying customers, with 240 staff working across 18 countries. Last year, its founders were awarded the EY Entrepreneur of the Year award.

Mr Coppinger, Teamwork’s chief executive, told The Irish Times the company has performed well this year despite the coronavirus crisis.

“Things are going really well in general. Our business is really picking up after a Covid slump in the April to June period.

“We sitting on a stockpile of cash and ready to use it for growth and overall we’re really excited about what 2021 will deliver,” he added.

Newly filed accounts show Teamwork recorded a $1.1 million (€930,000) loss due to increased spending in 2019 that included opening a new office in Belfast and announcing a number of new jobs as part of a multi-million euro investment in the North. The company also unveiled plans for a new €28 million campus in Cork that was intended to commence this year, but which has since been put on hold for now.

The company earlier this year secured a €4 million debt facility from Silicon Valley Bank. In its latest accounts it said that on the basis of trading activities to date this year, it does not expect the coronavirus crisis to materially impact on the business.

“We have just formalised appointment of two board members, Fergus Gloster and Tom Hickey, and can reveal that we have just inked a deal with a fantastic new chief marketing officer who is starting in February and will bring years of experience to bear. We’re just released a new website that fully supports five languages, have multi currently offering releasing this week, are spinning up servers in Australia, and ramping up our product offering,” Mr Coppinger added.