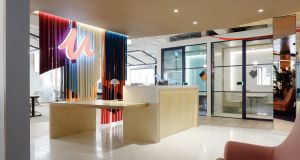 Online education provider Udemy plans to create 100 jobs in Dublin, just eight months after it announced a similar number of new roles for the capital.

The moves comes as the learning platform raised a further $50 million (€42m) from backers last week to bring investment this year to $100 million and total fundraising to date to $250 million.

The company is now valued at $3.25 billion following the Series F funding round, as against $716 million four years ago.

“The plan is to continue to significantly increase our footprint in Dublin,” Udemy’s EMEA managing director Bill O’Shea told The Irish Times.

“We announced plans to take on more people this year, and we are probably a little bit ahead of that in terms of hiring. Our expectation is that we will probably take on a similar number of people next year, if not more.”

Udemy, which first established operations in Dublin in 2014, announced plans to double its workforce to 200 people earlier this year as it opened a new 2,000sq m European, Middle East and Africa (EMEA) headquarters here in early March.

The company, which had been growing fast even prior to the Covid crisis, has seen significant growth during the pandemic as more corporate users and consumers embrace online learning.

Its courses cover topics as diverse as software engineering and personal brand building, to pet care, sourdough-making, photography, yoga ,and web development. Its platform has more than 35 million unique users.

“We set lofty expectations this year and have more than exceeded them, and it feels good that we as a company are doing something positive at a time that is difficult for everyone.”

Udemy is active in over 190 countries and as much as 70 per cent of the company’s current revenues come from outside the US.

While the company does not typically disclose turnover, it did reveal recently that its corporate division, Udemy for Business, has scaled from $1 million to $100 million annual recurring revenue (ARR) in just five years.