Amazon lays off dozens of employees at drone programme 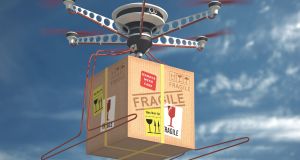 A delivery by drone. Drones have been billed as a future method of delivery for smaller Amazon packages. Photograph: AFP via Getty

Amazon is laying off dozens of R&D and manufacturing staff working on its much-anticipated delivery-drone project as the company turns to outside help to get its heavily-delayed ambitions off the ground.

In recent weeks the company reached tentative deals with two external manufacturers to build component parts of its long-awaited drone, billed as a future method of delivery for smaller Amazon packages.

The full terms of the agreements – with Austria’s FACC Aerospace and Spain’s Aernnova Aerospace – were still being finalised, a person familiar with Amazon’s plans told the Financial Times.

Additional deals with third parties could be reached soon, the person said, following Amazon’s “request for proposal”, sent out to a number of companies in the drone space over the past year.

Despite being at least seven years in the making, first unveiled by Jeff Bezos, founder of Amazon, in 2013, drone deliveries at scale are still a “years away” prospect for the group, the person added, with development set to progress “slowly but surely” in the new year.

This contrasts with comments from Jeff Wilke, Amazon’s head of worldwide consumer, who told an audience in Las Vegas last year that the company’s drone deliveries were imminent.

“We expect to scale Prime Air both quickly and efficiently, delivering packages via drone to customers within months,” a blog post accompanying his address read.

An Amazon spokeswoman confirmed the layoffs, characterising them as part of a transitional phase for the unit, which earlier this year received US regulatory approval to begin limited testing.

“As part of our regular business operations we are reorganising one small team within our larger Prime Air organisation to allow us to best align with the needs of our customers and the business,” said spokeswoman Kristen Kish, in an emailed statement. “For affected employees, we are working to find roles in the areas where we are hiring that best match their experience and needs.”

Amazon would not disclose how many staff it now had working on the drone project. At the time of writing the company’s public-facing recruitment site lists 57 open roles on Prime Air, mostly software and systems-related.

Both FACC and Aernnova specialise in the manufacturing of composite components for the aviation industry, counting Airbus, Boeing, Bombardier and others among their clients.

Neither company responded to requests for comment on the deals.

Amazon’s Prime Air – not to be confused with Amazon Air, its cargo airline – will make use of a hexagon-shaped, fully-electric drone that can fly up to 15 miles and carry packages weighing under five pounds, according to details released in mid-2019.

In March, Amazon announced it was bringing in former Boeing executive David Carbon to run the unit, replacing Gur Kimchi, who had been in charge of it for seven years.

However, according to David Benowitz, head of research at DroneAnalyst, Amazon is trailing what is now a highly competitive field, with rival Walmart set to begin trialling deliveries with San Francisco-based drone company Zipline.

“It’s not meeting the lofty goals and the original vision quite yet,” he said.

Amazon’s intended approach is to land its drone near the customer’s home, presenting obvious concerns around safety.

The US Federal Aviation Administration is making prospective delivery drone operators meet strict criteria in order to begin even limited testing. In August this year Amazon received its Part 135 certification allowing some highly-controlled testing to begin, although the company has not yet shared details of where it intends to run its flights. – Copyright The Financial Times Limited 2020