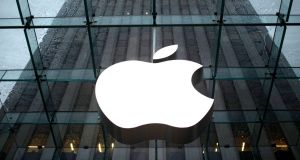 The size of Apple tax escrow fund has yet to be confirmed but it could be in the range of €13 billion to €15 billion, including interest, according to the Department of Finance. Photograph: Reuters/Mike Segar

The Department of Finance has revealed that the amount of back-taxes it will have to collect from iPhone maker Apple could be up to €15 billion, including interest.

The Department detailed the figure in a statement on Saturday as it launched a process to find investment managers and custodians to take care of the money while the State appeals a 2016 European Union ruling that Apple received €13 billion in illegal state aid in the decade to 2014.

“The Government is fully committed to ensuring the recovery of the Apple state aid takes place without delay and has committed significant resources ensuring this is achieved, notwithstanding the appeal lodged in 2016,” the Department said.

“The recovery amount will be paid into an escrow with final release when there is a final determination in the European courts over the validity of the European Commission’s decision.”

The Department confirmed that it will seek the services of an escrow agent or custodian, with the National Treasury Management Agency appointed to run the procurement process. One or more investment managers will then be appointed to manage the escrow fund.

The sheer amount of money involved means the fund cannot be transferred into a bank account.

The size of the escrow fund has yet to be confirmed but it could be in the range of €13 billion to €15 billion, including interest, according to the Department.

At the end of Apple’s last financial year in September 2016, only $20.5 billion (€17.6bn) of the technology giant’s $237.6 billion (€203.7bn) “cash” hoard was actually made up of cash or equivalents. The remainder was invested in US and other government bonds, corporate securities and asset-backed bonds, such as debt issued by mortgage providers.

The investment managers appointed to the escrow would be expected to adopt a similar investment style to Apple.

The Government agreed at the outset of the EU ruling last August that it will collect the money and hold it in escrow until appeals related to the case are heard by EU courts, a process that could take between four and six years. It is more than six months since it missed an original EU deadline to collect the funds.

The EU’s competition commissioner, Margrethe Vestager, complained in May that the Government was “taking too long” to collect the taxes.

In a statement, Apple said: “We continue to cooperate with Ireland on the recovery process the Commission has mandated but remain confident that once the general Court of the EU has reviewed all the evidence it will overturn the Commission’s decision.”

The company added: “We believe every corporation has a responsibility to pay taxes and as the largest taxpayer in the world we’re proud of the contributions we make to the countries and communities where we do business. The European Commission’s case against Ireland has never been about how much Apple pays in taxes, it’s about which government gets the money.

“The United States government, the Irish government and Apple all agree we’ve paid our taxes according to the law.

“Since virtually all of our research and development takes place in the United States, according to the law, we pay the majority of our taxes in the US. The Commission’s ruling is contrary to the tax principles countries around the world have adhered to for decades.”