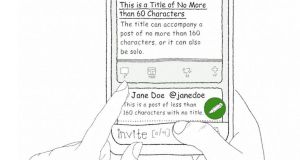 Column’s “truth” button: instead of liking a post, you can rate it as true or not.

The creator of the original “like” button (the one on Vimeo, not Facebook) has plans for a new social network and an entirely new interaction: the “truth” button. Jake Lodwick, the founder of video-sharing platform Vimeo is chief technical officer of Column, an exclusive social network that names Peter Thiel as a founding supporter.

Lodwick also develops apps with Kayne West who incidentally is listed as another public figure Column may bring on board. You see a picture emerging: this will be a social network designed around cultural, economic and tech bigwigs who will oversee a “column” or sub-community that users will have the option to subscribe to.

Column isn’t available yet but MIT Technology Review received a pitch deck describing it as “a social network to make us all smarter”. Potential investors are told revenue will come from subscription fees as well as charges to brands to run their own Column. Meanwhile “luminaries” such as Nobel Prize winners or high-profile subject matter experts like chef Heston Blumenthal would be paid to found a Column.

What about that “truth” button? It’s just another interaction but instead of liking a post you can rate it as true or not, which is somehow more useful. Column sounds like a premium version of Facebook with dash of LinkedIn, a pinch of Quora and a whisper of fairy dust.

1 Bank leaked my loan request to family who tried to rip me off
2 Ryanair and Aer Lingus monitor impact of coronavirus on travel to Italy
3 Mastercard to create 1,200 new jobs by expanding base in Dublin
4 Boris Johnson's new immigration regime will damage much more than industry
5 A maverick taking on the Irish whiskey establishment
Real news has value SUBSCRIBE