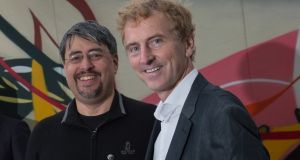 Bill Liao, managing partner, and Sean O’Sullivan, founder and managing partner: SOSV was last year ranked as the fourth-largest and most prolific accelerator investor in the world. Photograph: Barry Cronin

SOSV, a venture capital firm set up by Sean O’Sullivan, is looking to raise $250 million (€212 million) for a fourth investment fund.

The firm, which is led locally by CoderDojo co-founder Bill Liao, last week filed paperwork with the Securities and Exchange Commission (SEC) in Washington, DC for the new fund, which will be used to invest in more early-stage start-ups.

SOSV was last year ranked as the fourth-largest and most prolific accelerator investor in the world. It closed its third $150 million round in early 2017.

The VC, which was previously known as SOSVentures, was established by Mr O’Sullivan, a co-founder of mapping software company MapInfo and an early investor in Netflix. It has funded over 700 start-ups since it was set up in 1993 and is currently funding over 150 firms a year through its numerous accelerators, which cover areas such as hardware, software biology, food, robotics, medical devices, transportation and green energy.

The fund, which has $300 million in assets under management, employs 95 people globally, including a small number in Cork city.

SOSV last month relocated its RebelBio life sciences accelerator programme to London from Cork due to a lack of incentives for investors and a lack of support from partners beyond Enterprise Ireland.

Prior to its decision to relocate RebelBio, SOSV had cancelled a planned second annual instalment of the programme and withdrew plans to establish a European version of Food-X, for the same reasons.

Speaking to The Irish Times, Mr O’Sullivan said: “We have been able to expand our operations globally on the back of the start-ups’ tremendous progress in the fields of hardware, where SOSV’s HAX programme dominates, and in life sciences, where SOSV’s IndieBio and RebelBio programmes are the two leading programmes for first-time entrepreneurs in the world.”

He added that the company had also benefited from its Chinaccelerator programme , from which BitMEX, seen as one of the world’s most advanced Bitcoin derivatives exchanges, graduated.

Other companies in the SOSV portfolio include Memphis Meats, a San Francisco-based start-up developing meat grown from animal cells, and Harmonix, a leading independent game development studios, with products such as Guitar Hero.

The RebelBio programme also introduced the world to a number of innovative start-ups that have made news headlines across the globe. These include Perfect Day, a company developing a product that uses bioengineered yeast to produce real milk protein. The former Cork-based start-up recently raised $25 million.

“Every year we parse through the more than 4,000 applications we get to be part of our accelerators to come up with the top 150 start-ups we believe we can help most. It’s great work and the 95 people who work for SOSV globally love what we do,” said Mr O’Sullivan.