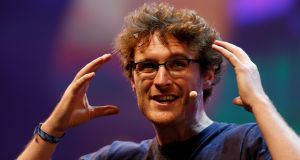 Web Summit’s co-founder Paddy Cosgrave: The city of Valencia has submitted a €170 million open bid to host the Web Summit over a 10-year period. Photograph: Reuters

The city of Valencia has submitted an open bid to host the Web Summit over a 10-year period worth up to €170 million.

At least eight European cities are now believed to have expressed an interest in hosting the technology-focused conference, which began in Dublin. Other contenders for the conference include Munich, Paris, Berlin, Madrid, Bilbao, London and current host city Lisbon.

Valencia’s open bid comes as speculation mounts as to where the event will be held next year. Web Summit’s current deal with the Portuguese government ends later this year. While the company has the option of a two-year extension, it has made no secret that it is open to relocating the event to another city.

Representatives from the city of Valencia have committed public cash over a five-year period with an option to host the event for a further five years.

Approximately €17 million per year has been offered as part of an overall package that also covers venue costs and other items.

Barcelona has previously also been linked as a host city for Web Summit but it is not believed to have submitted a bid as of yet.

A Web Summit spokesman said negotiations are ongoing. He added that the size of bids are a matter for city authorities.

The organisers of the Web Summit, whose sister event MoneyConf is being held in Dublin next week, reported record profits in 2016, the year in which it first ran the tech conference in Lisbon following its controversial move from Dublin.

The Irish-founded tech conference started in Ireland in 2009 with fewer than 400 attendees. Web Summit has continued to grow and now expects to attract about 70,000 attendees to this year’s event in November in Lisbon.