US strikes $1bn deal with China’s ZTE to lift sanctions 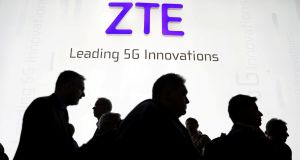 ZTE was banned from sourcing US components in April after it was caught violating US sanctions on Iran and North Korea. Photograph: Sergio Perez/Reuters

The US has reached a deal with China’s ZTE that would lift a ban that prevented it from buying US components, allowing the embattled telecoms heavyweight to return to business.

Commerce secretary Wilbur Ross told CNBC on Thursday that the US has signed a definitive agreement with ZTE, under which China’s second-largest telecoms equipment maker will pay $1 billion (€845 million) in fines and put in place board and management changes in exchange for the removal of the sanctions.

“At about 6am this morning, we executed a definitive agreement with ZTE. And that brings to a conclusion this phase of the development with them,” Mr Ross said in a CNBC interview.

The US first hit ZTE with a total ban on sourcing US components in April after it was caught violating US sanctions on Iran and North Korea, and the terms of a subsequent plea agreement.

ZTE is highly dependent on US suppliers for parts used in its phones and other products, and the ban forced the company to partially shutter its operations and nearly brought it to the brink of collapse.

The group’s prospects improved last month following news that president Trump’s aides were negotiating a deal to lift the sanctions against it in exchange for senior management changes and payment of a large fine. ZTE was previously fined $1.2 billion by the US last year.

Mr Ross said the deal struck is “the most strict compliance that we’ve ever had on any company, American or foreign”.

“We are literally embedding a compliance department of our choosing into the company,” he said. – Copyright The Financial Times Limited 2018