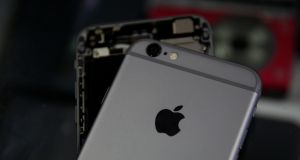 The US government has sought to intervene in Apple’s appeal against an EU order to pay back up to €13 billion in Irish taxes, a source familiar with the matter said y.

The iPhone maker took its case to the Luxembourg-based General Court, Europe’s second-highest, in December after the European Commission issued the record tax demand, saying the US company got tax deals from the Irish Government which amounted to illegal subsidies.

The decision was criticised by the Obama administration, which said the European Union was helping itself to cash that should have ended up in the United States.

The Trump administration, which has tentatively proposed a tax break on $2.6 trillion in corporate profits being held offshore as part of its tax reform, has not said anything in public about the case.

“I can confirm the United States filed an application with the European Union General Court to intervene in the case involving the retroactive application of state aid rules to Apple, ” said the source, who declined to be named because of the sensitivity of the matter.

The General Court is expected to hear the case in late 2018, another source with knowledge of the matter said.

In a statement, as spokesman from the Department of Finace said: “As this is Apple’s own legal case, it is not appropriate to comment on any proposed interventions in their case but I can confirm that Ireland has intervened in that case to ensure that the best possible case for Ireland is presented to the court on all matters relating to the Apple state aid decision.”

Apple has said it was a convenient target for the EU and that the EU competition enforcer used an “absurd theory” to come up with a punitive figure.

Amazon and McDonald’s are also in the EU crosshairs over their tax deals with Luxembourg.

Ireland, the Netherlands, Luxembourg, Starbucks, Fiat Chrysler Automobiles and several other companies that were also ordered to pay back taxes to other EU countries have similarly challenged their EU rulings.