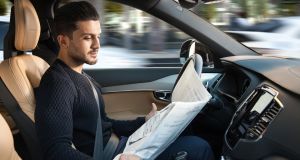 The AA and University of Limerick have agreed a research partnership involving Irish motorists to study developments in connected car technology and their implications for Irish road users.

The rapid development of car technology is heralding a major social change in terms of ownership and personal transport. Both organisations feel that the broader implications in Ireland and elsewhere are not fully understood.

The partnership will look at Ireland as a test bed for new vehicle technologies and assess their likely effects.

“There has never been a more exciting time for motoring, ” said AA’s commercial director John Farrell. “New developments like connected cars, automatic emergency and rescue calls and self-driving cars are revolutionary. We want to understand what this will mean for drivers and society. To do that we are working with the perfect partner in UL, one of Europe’s most dynamic young universities.”

UL and the AA are immediately launching a connected car trial featuring technology developed by the AA in partnership with an organisation called Intelematics, which is supported by Europe’s motoring organisations.

The Irish trial will see 300 AA member’s cars fitted with a smart device that will connect to the engine management system and share data from it with the AA in real time. Data will be analysed continually and can be used among other things to assess whether an insurance premium has been calculated fairly.

“Tracker devices have been around for a while but Intelematics is a lot more than that,” said Farrell. “Our system features algorithmic learning which will monitor the performance of the car and the driver in all conditions. As we collect that real world data we will be able to predict how the car will perform. In many cases, we will know that a car is going to break down before the driver does.”

“The data and research obtained is part of a broader research agenda that is financed by the European Commission in two consortia, VI-DAS[1] and Cloud-LSVA[2]. These include UL along with many leading European research organisations. We are delighted to feature the AA in this important study,” said Dr Martin Mullins from UL.