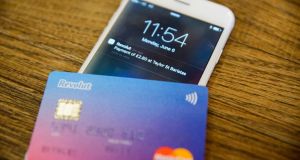 Revolut has gained 39,212 customers locally, with almost 10,000 customers having joined in the last three months alone

Revolut, an app-based banking alternative, which has almost 40,000 customers in Ireland, has raised $66 million (€58 million) in a Series B round to fund expansion across Asia and North America.

The investment round was led by Index Ventures with existing investors Balderton Capital and Ribbit Capital also participating.

Total investment in Revolut, which was launched by Nikolay Storonsky and Vlad Yatsenko in July 2015, now stands at $83 million.

Revolut said it intends to use the additional funds to expand globally as well as to launch a host of new products, including crypto-currency integration, across Europe.

Revolut current has 715,300 customers globally and is targeting 1 million by the end of the year. The company, which launched in Ireland in January 2015, has said it is intent on disrupting Irish banks by allowing users to spend globally at the real exchange rate and eliminating unfair fees for standard transactions, contactless payments and ATM withdrawals.

Revolut said it intends to open an office in Dublin shortly and is currently recruting for a number of positions, including country manager. The company has gained 39,212 customers locally since launching here, with almost 10,000 customers having joined in the last three months alone.

Revolut allows users to open a current account in 60 seconds, exchange currencies at the interbank exchange rate, transfer to any bank in the world, and spend fee-free in 120 currencies with a contactless MasterCard.

The company said Irish users will soon to be able to open a personal IBAN account, meaning they can have their salary paid directly into their Revolut account.

A 12-month membership to Revolut Premium costs €82 and offers subscribers fee-free currency exchanges at interbank rates, a premium MasterCard, overseas medical insurance, a doubling of limits on ATM withdrawals and 24x7 customer support. About 9 per cent of Irish Revolut subscribers are signed up to the premium account.

The firm, whose headquarters are in Canary Wharf, holds an electronic money licence from the Financial Conduct Authority (FCA) in the UK. In addition to its financial service offerings, Revolut claims a wealth of technological advantages over traditional banks, including real-time spending alerts, budgeting controls, bill splitting and the ability to immediately freeze cards should they be lost or stolen.

More than 500 Irish companies have signed up to Revolut for Business so far, the firm said.

1 Angela Merkel sweeps in to save the euro zone
2 In six months we will be in the grip of a 1980s-style recession
3 Don’t expect a bonanza for Ireland from the EU’s €750bn recovery cash
4 What will it take to reopen the world to travel?
5 Property price drop of up to 12% this year a ‘reasonable’ assumption – McDonagh
Real news has value SUBSCRIBE