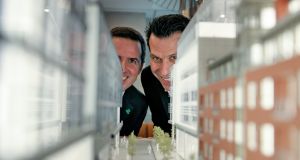 Autodesk chief executive Andrew Anagnost said there’s not a lot of long-term benefits for the company in the Trump administration’s tax reforms.

“It hasn’t affected us all that much,” Mr Anagnost said in Dublin on Tuesday. “There may be some long-term benefits for us but, as a software company, there’s not a lot in there for us in terms of long-term benefits. We certainly will probably see some but it’ll be years out. It’s not as big a thing as it is for other companies.”

The company, which helps engineers, architects and others with design software, is hiring 200 people this year with the opening of a new facility in Dublin.

The California-headquartered company, which employs about 7,000 people worldwide, is looking to recruit across a number of roles, including finance, operations, localisation and sales operations.

Autodesk, a provider of 3D design, engineering and entertainment software, is best-known for AutoCad, which was first released in late 1982. Its technology has been used in a number of buildings locally, including the new children’s hospital.

“We selected Dublin because of its global business environment, talent, ability to support European languages, excellent long-term cost structure, and quality of life for employees,” said Mr Anagnost. “Dublin is a vibrant, multicultural and creative city. These qualities align well with our brand and culture and we think Dublin will be a great fit for us,”

The investment is supported by the Government through IDA Ireland. IDA chief executive Martin Shanahan said the company’s decision to establish in Dublin strengthened Ireland’s reputation internationally as a leading location for companies in the software sector.

Minister for Business, Enterprise and Innovation Heather Humphries welcomed the arrival of Autodesk to Ireland.

“We have the IT skills available to enable the company to grow and to embed their operations in Ireland,” she said. “Their arrival is a great vote of confidence in what we have to offer.” – Additional reporting: Bloomberg

1 Aldi to impose limits as Christmas toys go on sale
2 Fair deal? Family at odds with hospital and each other not so sure
3 What to consider if older person or loved one needs care at home
4 Monsoon landlords win challenge over creditors arrangement that cut rents
5 Irish house prices could buck European trend and fall this year, says S&P
Real news has value SUBSCRIBE