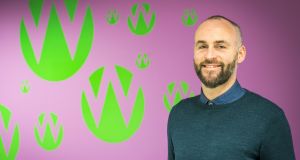 Wolfgang Digital chief executive Alan Coleman: The digital duopoly of Google and Facebook ‘make it really easy for advertisers to spend their money’.

The “relentless” growth of the online economy continued in 2017 with Irish ecommerce sites in Ireland showing a 45 per cent surge in revenues, a new study by digital marketing agency Wolfgang Digital shows.

While more people are now shopping online, those who already were have become more relaxed about it, settling into established habits and buying from sites more frequently, Wolfgang’s study suggests. Traffic to the sample of sites in its study rose 14 per cent and the volume of transactions increased 32 per cent, as a greater proportion of site visits ended in a purchase.

After this “rampant” growth, it estimates that Ireland’s online economy was worth €12.3 billion or 6 per cent of gross domestic product (GDP) in 2017, another runaway year for ecommerce.

“I keep thinking, this must be the year when growth slows,” says Wolfgang Digital chief executive Alan Coleman. Across Europe, the online economy accounts for an average of 5 per cent of GDP. However, in the UK, it is 12 per cent.

“What that tells me is there is still room for us to grow,” he says.

Wolfgang’s data, derived from retail and travel websites that generate a total of €240 million in online revenue, shows that travel continued to boom, with revenues up 114 per cent year-on-year, while retailers saw their online revenues climb 19 per cent.

But in the fourth quarter, dubbed the “golden quarter”, retail revenues only increased 11 per cent year-on-year, despite a 16 per cent rise in traffic. This suggests shopping event Black Friday, rather than introducing new spending to the market, is cannibalising Christmas sales and hurting retailers’ margins.

“Businesses shouldn’t become too hyper-focused on this one date,” the Dublin-based agency’s report concludes.

Meanwhile, the digital duopoly of Google and Facebook are cleaning up on advertising in large part because they are constantly releasing new ad formats that they say will improve the rates at which the ads are converted into sales.

“They make it really easy for advertisers to spend their money there, because they are so focused on conversion,” says Coleman.

Since last year, Facebook has also allowed retailers who upload email addresses (supplied to them by customers at the point-of-sale) to track when offline purchases began as online research. It’s a common consumer behaviour that owners of digital ad inventory would naturally like to talk up to advertisers as evidence of the effectiveness of a digital ad.

“It is something that we have been crying out for – for years. It’s the biggest black hole in measuring,” says Coleman, who predicts Google will be next to do the same thing.

Meanwhile, ecommerce now finds itself at an interesting juncture as the whole retail industry “anxiously” waits for Amazon to make its next move.

The tech and media giant, which enjoys more product searches than Google, has been “very quietly” building up its advertising platform and is tipped to make a big play in the area soon – possibly by targeting the share of the market currently held by Google AdWords.

1 In this strangest of recessions, what happens next for Ireland?
2 Michael O’Leary is the boss you want to lead an airline out of crisis
3 Irish whiskey sales near milestone of 12m cases a year
4 Estée Lauder staff at Dublin airport plan further strike action
5 Will brother’s widow get half of our parents’ estate when they die?
Real news has value SUBSCRIBE