Net Results: Terrorism is no excuse for shutting down social media 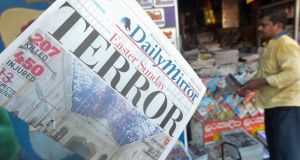 After the horrific Easter Sunday attacks in Sri Lanka, which left hundreds dead and hundreds more injured, the government there moved to shut down access to the large social media platforms such as YouTube and Facebook.

The reasoning, according to the government, was that limiting access would make it harder for the perpetrators or their supporters to organise further attacks.

Most media coverage reported the shutdown in one of two contexts.

Either it was taken as a modern sign of the times, where, during acts of conflict and violence, the logical step in a downward-spiralling situation would be to shut down online communication platforms to (supposedly) prevent more violence. Thus, we got the “look how bad things are there: they had to shut down social networks” line of commentary.

Or, the shutdown was seen as a schadenfreude opportunity to berate the platforms, within the current backlash in far more privileged and wealthy western nations in North America and Europe.

For example, the noted technology and opinion writer Kara Swisher wrote this week in the New York Times that her initial reaction was to think to herself, good when she read about the shutdown. In her piece, she expands on why: a concern that social media overall is a polarising, drastic failure. She has previously called social media giants “digital arms dealers of the modern age”.

Swisher is correct that the litany of problems with social media platforms is depressingly extensive and disturbing.

Regulators and governments have been slow to realise these problems, and have been ineffective and reluctant agents for imposing significant change.

But both takes on the Sri Lankan platform shutdown are not just misguided, but dangerous. They are disconnected from the realities for the huge populations that use the platforms in more repressive countries, and the activists who take enormous personal risks to highlight such shutdowns, government control and censorship.

This issue was flagged by Sri Lankan activists and writers.

Sri Lankan author and researcher Yudhanjaya Wijeratne (@yudhanjaya) tweeted: “Dear #American journalists: For the love of whatever you hold holy, stop twisting this incident to serve your anti-Facebook technovalley politics. Right now, in a country with tight government controls on trad media, social media is a boon for us.”

He followed up: “And make an effort to understand; violence in [Sri Lanka] began before social media, Internet, telephony. To a large extent much of race hatred is still fuelled by print media in this country. You want to point fingers, at least do your research into a complex history.”

The paper states: “Shutdowns are found to be much more strongly associated with increases in violent collective action than with non-violent mobilisation.”

India has used internet shutdowns more than any other country, 154 times between January 2016 and May 2018, according to Access Now via Vice News.

A recent report by Pakistan-based human rights group Bytes for All on internet access in Pakistan – a country that disabled internet access 19 times in the same period, generally by turning off mobile networks – expresses concern at the use of national security to justify shutdowns.

“The country remains extremely low ranked on multiple international scorecards when it comes to internet access, and systemic issues such as suspending cellular networks for security reasons continue to impede progress,” the report states.

The social media ban makes it difficult for activists to mobilise, make sure communities provide and are given accurate and timely information

And not just economic progress. Access to social media is seen as a critical support for activists and for encouraging transparency and democracy. Shahzad Ahmed, director of Bytes for All, notes in the report, “Social media has emerged as a democracy strengthening tool.”

I asked Irish human rights group Front Line Defenders, which directly supports human rights defenders and specialises in providing them with digital expertise and protection, for their view.

They in turn contacted a Sri Lankan human rights activist, who asked not to be named and replied: “The social media ban makes it difficult for activists to mobilise, make sure communities provide and are given accurate and timely information, and publicly message the need for harmony and non-violence to local groups.”

They added that the ban “does not counter malicious rumours and fear. It deepens a sense of isolation, and the sense that we are not getting clear information on the latest threats, which leads to panic”.

Several activists have noted that, by contrast, the Sri Lankan government had dismissed as “fake news” advance warnings of the attacks and, for years, ignored concerns expressed by many Sri Lankan Muslims, online and in print, about the extremist groups connected to the attacks.

We do need a comprehensive, internationally relevant consideration of social media platforms, how they operate and, especially, their secretive algorithm and surveillance capitalism-based business structures that enable many of the most serious problems.

But we also need a far broader understanding of the importance of internet-based communications – typically through social media platforms – in enabling positive change in parts of the world many of us barely bother to think about, except at times of tragic headlines.