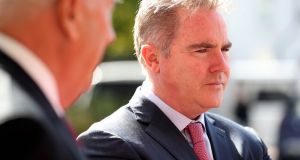 Avolon chief executive, Dómhnal Slattery, said there was a need to revisit how the State backs start-ups here

The Republic is uniquely placed to be a global start-up leader but faces a number of challenges in becoming one, Irish entrepreneur Dómhnal Slattery has said.

He has called for the Government to be more discriminate in terms of the companies that receive State funding and said there’s a need to “radically re-engineer the tax code” for entrepreneurs.

Speaking to The Irish Times to coincide with Avolon’s publication of a paper on the Irish tech start-up scene, the founder and chief executive of the aircraft leasing company spoke of a need for increased State intervention to help place the Republic on the global map.

The Project i paper recommends developing tax and incentive structures that will help companies seeking to grow.

It suggests harnessing the global business diaspora to create a strong support system for start-ups as they grow and move into international markets, “with a Silicon Valley-based network providing a vital conduit to enable Ireland to become a leading external feeder to the valley.”

The Avolon-sponsored study highlights a number of issues that need to be addressed in order to boost the start-up ecosystem. These include a lack of world-class accelerator programmes and a paucity of venture capital funding.

The paper also calls for the creation of a lobby group to act on behalf of early stage companies, as well as for better mentors, higher quality commercialisation of research and greater encouragement of entrepreneurship generally.

Mr Slattery said there was a need to revisit how the State backs start-ups here.

“Enterprise Ireland has done a great job of funding start-up biz in Ireland but pretty much everybody can get a few quid from them. We need to be much more discriminate in how we fund from government coffers and really screen start-up businesses,” he said.

“EI’s annual report doesn’t give a granular metric for how many starts-up have truly been successful either in terms of value or jobs created. We put a lot of money through that channel and I wonder whether we are getting the best bang for our buck . . . my gut says we’re not,” Mr Slattery added.

Publication of the Project i paper comes two months after Mr Slattery used an Enterprise Ireland-sponsored gathering to lambast the Government for failing to foster entrepreneurship. In a notably critical speech, the businessman said more needed to be done to encourage entrepreneurs to take necessary risks.

Announcing publication of the new report on Wednesday however, Mr Slattery was softer in his remarks, saying the study’s remit was to “encourage, not criticise.”

Nonetheless, the businessman, who runs what is the third largest aircraft lessor in the world, called on the Government to do more to incentivise entrepreneurs and those who back them.

“There is no desire on my part to beat up the Government - this is about collaboration. However, the reality is that Ireland has a very unattractive tax treatment for entrepreneurs, especially when they exit. There needs to be a fundamental re-engineering of the tax code for companies that scale their business and better stock options so as to create and attract world class talent,” Mr Slattery said.

He went further to say that the failure to encourage entrepreneurship meant that company founders did not have sufficient ambition.

“We have a culture where entrepreneurs sell out too early. Someone offers them €20 million and they take the money and run. In Silicon Valley though the philosophy of founders is based on how they can change the world, knowing that in the process they’ll become billionaires and won’t sell their intellectual property on the cheap,” Mr Slattery said.

“We have to bolster the entrepreneur mindset here so that we can build more unicorns,” he added.

Enterprise Ireland said it was reviewing the document and that it works and supports the brightest and best manufacturing and internationally traded services start-ups in Ireland that have the ambition to take their businesses global.

“Enterprise Ireland operates a rigorous screening and commercial evaluation process and all recipients of financial support must satisfy a strict set of criteria,” a spokesman told The Irish Times.

Only way is up for Stripe as valuation skyrockets 05:53
Is RTÉ board tuning out from digital expertise? 05:40
Kinzen raises $2.2m as it helps clients fight ‘misinformation’ 05:30
Musk’s money, Santa’s immunity and Blinken’s Brexit analogy 04:59
Direct sea routes to Europe offer certainty in choppy Brexit waters 01:00

1 ‘I don’t need to do any of this. . .I don’t actually need to work.’
2 Direct sea routes to Europe offer certainty in choppy Brexit waters
3 There was no vaccine for Anglo: Why the last crisis was different
4 Unilever’s Dutch and British arms merge after 90 years ahead of Brexit
5 Admission of mistake in Oxford vaccine dose raises doubts over reliability
Real news has value SUBSCRIBE